Dedicated to Dad. You have faced your own personal battle through chemotherapy, remaining strong and coming through.

Your quiet strength and determination, in life I have learned so much from you.

As if 100km isn’t a challenge, then the weather forecast guessing games continued to play hard for preparation right up until the morning of the event itself. From 4:30am, final and appropriate kit selection was made and we were off to Bakewell, Derbyshire.

I completed the 100km Thames Path Challenge in September 2019 (15 hours 17 minutes) and subsequently entered other and ultimately cancelled Ultra events through 2020. Training had been sporadic at best due with annoying niggly injuries and inconclusive expensive Physio trips. In the mind however, there was no backing down, this event had been a long time coming and the anticipation and hunger never went away. Round 2 commence.

Bakewell Showground 6.40am start, event organised excellently by Action Challenge. Participants gather, relative silence and apprehension but a quiet sense of togetherness for what was about to unfold. The route was a figure of 8 therefore running from Bakewell via Bakewell on the way to Bakewell. Somewhere in between throughout this exciting route was the most beautiful Peak District scenery, some familiar, some places I never knew, all on the doorstep from Sheffield.

Rain made its presence know from the off as Chatsworth House came into view in the early stages. I was mindful of the challenge this would present long term as the feet were already soaked. As ever, Dad provided support along the way, popping up at random locations and the nominated rest stops. Dad commented on the speed of the lead runner coming through Baslow (he must not have recognised me at that point) the field of runners already spread out around 10km in. First rest stop just on from Calver crossroads and The Eyre Arms.

Several kms later with on / off rain we ran down through “Deep Dale” before climbing up to Monsal Head where Dad waited once again. I momentarily enjoyed the view, chatting with some nice people who pulled faces when I told them how far I was covering but they obligingly took my photo. Cream Tea and Scone would have been nice at this point from the pub / café but no, onwards.

Back to Bakewell feeling reasonably ok. I avoided the mistakes so far from the last 100km on the Thames Path Challenge, keeping the food and liquid intake simple. I must admit that completing half the distance to arrive back at where we started and then setting off for the same distance again was tough on the mind and a bit of a choker as I set off for the second half late afternoon, briefly taking the opportunity to speak to my other half Kate and the kids over the phone.

The sun was out, and it felt warm but the sun cream wasn’t necessary as the day was getting on. I dried out a bit but it wasn’t for long.

I recall visiting Lathkill Dale as a kid with my parents and looking at the monster Trout in the river. However, this section was hard as the path underfoot turned into loose rock ballast that you could not run on for fear of turning an ankle, this was a tough section as was the climb out the other end of Lathkill Dale.

Whist running on the White Peak Trial around 70km the weather made its presence known albeit briefly but big style. Mother Nature is a force to be reckoned with and she demonstrated as such when a thunder and lightning storm progressively worked its way closer with near horizontal rain for good measure. I learned as a kid to count between the light and the thunderclap as a rough idea how far away the storm was. Then a flash of light to the right-hand side of me and an immediate and very loud clap of thunder. The light and the noise made me turn my head sharply to one side before I turned to check the safety of other runners whom I’d passed minutes ago, close call. Thankfully I received the thumbs up from other runners in return from 150 yards or so back.

At the next rest stop (73km) everyone concurred that Nature had indeed been one big Mother and the whole episode was a bit close for comfort. Meanwhile, I was thankful (and harped on a bit too much now) for my Home Bargains plastic poncho (2 for a quid) that had prevented me getting drenched. Easy on, easy off, stick it down the side of the shorts. In all seriousness it was arguably the best item I carried with me on the day and saved me and my entire kit within my rucksack from a soaking several times. Yes, an expensive running jacket you have there but you aren’t going to pop that in a bin when it’s no longer required, instead you’ll carry on running with it for the next 27km.

Still on the White Peak Trial and an amusing and very nice German chap I’d paired up with was now becoming annoying as he continuously stopped to take photos on his phone for the Mrs. As we turned off the White Peak Trial, I ran off through a field and left him (I think he finished over 2 hours back from me in the end), not sure where that burst of energy came from at around 80km but it was necessary and the motivation to finish was firmly in my mind now.

My feet at this stage hurt. I had blisters which I’d been able to treat myself with Compede plasters and the Scholl “Party Feet” pads that ladies put in their high heels when out dancing. Thankfully the feet weren’t the state they were in on The Thames Path Challenge when I needed the assistance from medics, I pushed on.

I was on my own now in the low 80kms and kept maintaining some sort of pace and rhythm, dusk was setting, and I didn’t want to be out long in the dark as I knew that would be hard going. At this tough point, my mind was fully focussed on finishing. I thought of my old friend James, who I had known since I was a 6. James moved to New Zealand in 1982, we stayed in touch. James was a similar character to me, same age, a love of the outdoors, a passion for a physical challenge. James would have readily done this type of challenge alongside me and so this was an opportunity to honour his friendship by finishing, that was easy for myself compared to James’ own personal fight. James is no longer with us having passed away last year.

There was some tricky vegetation to get through in this section with nettles like Triffids. The green glow sticks had revved up and lit the way. The torch came out now and I was having to watch my footing on the mud and slim pathways. As dark set in, I began the downhill stretch towards Darley Dale and Rowsley and I could see the lights of Matlock to the right of me. I eventually exited the jungle and onto some road where Mum and Dad were waiting in the car, this was a great motivation to me. I nicked some biscuits off Mother whilst Dad explained that the final rest stop at around 88km was not far down the hill at The Whitworth Centre.

At the rest stop, I briefly spoke some form of gibberish in my tiredness to the event organisers then scoffed some chocolate and had a cuppa prior to the final push. There was some poor bloke in the medic tent having his feet sorted out, he looked completely poleaxed and as if he wasn’t going to get up, thankfully I did see him at the end of the race as he shouted across to me. Good recovery, well done mate.

The last section felt almost cruel at times. I tripped numerous times in the mud and down holes in the dark in some woods outside Darley Dale / Rowsley (with a rather menacing sounding river to the left). I passed people in their back gardens who sounded three sheets to the wind after England’s win over Ukraine, they had no idea! I crossed the railway lines of the Peak Railway a couple of times, I was in familiar territory now.

I passed 2 guys as I trotted the final km’s towards Bakewell, one of whom looked completely spaced out, his eyes had gone, he was with his pal for company, so I carried on at a steady trot towards Bakewell after we’d commented on the patches of beautiful clear night sky where the stars shone (yes it had finally stopped raining). I could now see the glow of the lights on Bakewell Showground in the distance, the finish line, 100km, I had made it at 1.11am Sunday morning.  Shame for Mum and Dad as they were not allowed near to the finish line due to current “restrictions” (there was no one else around). In the rest tent I devoured both the chicken and vegetable Balti curry versions sophisticatedly plated up with half rice half chips. A very nice couple were serving the food and chatted, thank you to the gentleman who immediately fetched me a chair when I said I felt dizzy.

Dad drove home in the fog arriving back at 2.30am, I had a bath as I smelt of cows and sweat. Bed, kids had me up at 7.30am Sunday morning.

As the event title suggests, this was a challenge and not a race as you’d think of a road, cross country or even fell race. However, in terms of mental stamina it was the greatest test I’d ever put myself through in all my years of running and physical activity events. I had hardly trained for this event, but I believed I would complete the 100km, proof that the mental mind set is key perhaps above all else? It was a great learning experience.

Why did this 100km take me much longer than the first one? In short, the weather, the terrain, the climb but they’ll be a next time…

The winner was Scott Brown in 9 hours 27 minutes 34 seconds. I am still trying to comprehend this achievement, respect Scott.

I have currently raised £315 for Cancer Research UK  https://www.justgiving.com/fundraising/Russell-Stevenson6 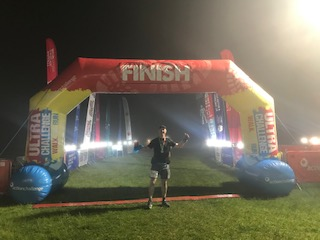