Our spies tell us that Strider Ashley Crow found a real race when he travelled up to Lancashire with a couple of his former North Derbyshire colleagues. This was a composite event run in seven tranches of roughly twenty to thirty athletes to comply with Covid guidelines. On a fast, flat cycle track course of nearly five laps, Ashley broke seventeen minutes for the first time running 16:59 to finish 23rd in race E and 130th overall. This was a seriously high quality event won by Tom Mortimer (Stroud) 13:39 with fifty athletes breaking fifteen minutes. The main talk however was about Beth Potter (Shaftsbury) who smashed records to run a phenomenal 14:41 although there’s discussion about whether this will ever be ratified as a world record. There’s also discussion about shoes with Beth wearing the new Adidas Metaspeed Sky whilst the times (don’t take any notice of the pb marker on the results as it’s not to be trusted) suggests that many of the field, including Ashley, were wearing these or their Nike or similar equivalent. I know a few Striders who have comparable footwear and the word is that they are exceptionally quick, exceedingly expensive and have an extremely short life expectancy. Ashley was a little disappointed with his investment however explaining that his race had a seriously quick start. He tried to keep with the top group as long as he could but got dropped after a lap or so and it ended up as a time trial being caught in no man’s land. Even so described as a brilliant event with no frills, just proper racing.

Link to Podium 5k Results and also to one of the many articles talking about Beth Potter’s effort. Athletics Weekly – Beth Potter 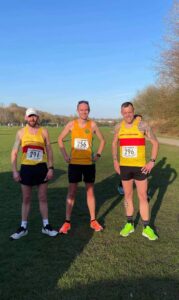 That’s Ashley in the middle with the flash boots on.