It all started the night before, with work being crazily hectic, I took the initiative to get my stuff ready, with only a few races under my belt I’m quite the running novice. So be prepared Lee, & don’t leave anything out to chance…

It’s “Race Day” & work strangely isn’t driving me nuts, instead I find the time to ask if any fellow Unofficial Head Torch Group (UHTG) runners going to the race wanted a lift, as parking is always an issue come race day…..a reply from Jill Davies (JD) & after a few threads we’d decided on time, pick up point & windows to be put down, everything is going smoothly. Back home now, no rushing needed as everything is packed & ready to go, waiting by the front door !!! Bag grabbed & off I went to collect my passenger, I didn’t want to be late, as being on Rob Davies time would get me in big trouble…🤣 With JD collected we were off, ETA even had us 5–10 mins early…..with a nice drive through Chatsworth & no traffic, we found ourselves there in no time, car parked bang across from the Square & Compass pub & race entry tents, prefect, everything is going like clockwork. We hopped across the road to enlist, pay our £6, (local fell races are a bargain) & collect race numbers & back to the car to get changed & ready to go!!!

Dug around in my bag & pulled out both T-shirt & Vest top, nice warm day, the vest it was, so now on to the task of pinning the number on neatly, straight & without stabbing myself, I figured out I cannot do this task wearing it, so it’s laid down & tackled on the boot floor. Right all pinned & straight, level & no blood, vest on!!! Next, OK which trail shoes do i use?? The Salomon sense pro 4, which are so so comfy, or do I go with the Cloud On’s adventure peak, not used as much but the two trail shoes offer different grip the On’s having a bigger deeper tread, I thought nope go with the trusty sense pro 4’s, you’ll be reyt. Rummaged in the bag, rummaged again, again, check under bag, side of bag, under towel, more bag rummaging, rummaging……………..^%&^^%(^))^^k, oh shoot I seem to have left them both nice and neatly where I’d so smugly placed them the night before… I’m now stood in my everyday Nike’s thinking, can I run in these?? After much deliberation I thought, nope Lee thats not a smart idea, maybe ok going up, but coming down you definitely need some traction… So off comes the vest, de/pinned & I jump back into the car, to answer work stuff emails, I’d got time to kill as I was now no more than a race chauffeur. JD had witnessed the missing trail shoe event, & unbeknown to me had asked around several running friends if they’d got any spare trail shoes, (size 6.5 I know, I drive Matt at MRK nuts, as he’s never got anything in) lol..

JD’s back, tap tapping on the car window, Lee, use mine what I’ve come in, they’re a 6, they’re road shoes but there a 6, & a few people are doing it in roads…. Oki doki we’re back on, vest back on, had to pin the race number in situ, wonky & uneven but, hey I’m back in the race!!! JD passes me her roadies, & I get my first fit feel, a tad tight, but what do I do, refuse such a kind offer & do more work emails, nope I’m in, so with that mindset, I tied up the nice bright pink laces….And off I went to meet my fellow striders/UHTG runners, with no shortage of innuendos, laughs & giggles, the funny side of my pre race day prep was meet with, always keep a spare pair in the boot of your car!!! With around 10mins to go, I thought I’d better get some kind up warm up done, so off down the road I go to see how the new kicks felt & a quick pee in the bushes, to which I was heckled at by a lady walking her dogs, I can’t repeat it!!

So here we go I’m at the mass start, with fellow striders & UHTG runners making reference to the pink laces, which maybe a quiz question at the UHTG Xmas do!!

The race organiser is now in full speech mode & we’re off, a road start which suited the pink roadies.My idea not to go off fast was always in my mind, but now I’m thinking right, if I can just keep some of our UHTG runners close by I’ll be happy with that, given the new race circumstances. The road soon disappeared & we headed left up into the woods, hard compact slippery mud, with plenty of roots, a chap at the side of me clipped a root & decked it hard. I was like ouch, thats gotta have hurt him, asking if he was OK, yup lad was his reply & he bounced back up & was off again. The first climb, although not stupidly steep, did go on for a while, & it was now that I started to get a tight right calf & pinching feelings from the pink roadies. This brought me to uphill hiking style, as I wasn’t even 2K in & felt broken. Eventually the climb flattened out & I tried to make some sort of ground up, but not much. The course then swung left again into the woods, & headed downhill, a defining moment in the race. So time to gain some ground up were my thoughts, I don’t think I’d taken much more than 10/15 strides when before I knew it, I’d lost my footing, straight from under me in the hard packed mud & I’m down, not hard but off balance & thinking what just happened there?? Still making my way down, trying to maintain some sort of speed, & yup down again, this time off track & rattling into some tree branches/ bushes, again the same thing no traction underfoot, without the lugs any minor change in direction was just so sketchy, just thinking if I carry on I’m gunna break something. So the decision made, Ricky’s race was now a plod/wander around the course.

Finally out of the death-defying woods, back towards the lovely Marshals that I met on the way up into the woods, this time turning right over a style & through some narrow undulating grassy/mud packed paths, I’m now on full alert for any dodgy ground that may pose more stability issues. To be honest the middle part of the race (plod) was difficult to really remember, it was a lot of grassy paths, with a few undulations, but I wasn’t worried, I’d backed right off just to stay upright, plenty of runners passed me & I was OK with that, I just wanted to get back in one piece.

The grassy paths popped us out onto a road, HELLO!! Pinkies were back in their natural surroundings, & I found myself wanting to go a bit quicker, calf & feet now quite sore but, I don’t think there was much more than 3k to go. So I had a little go at the tarmacy bit, knowing that just around the corner was this hill, that just stuck out like a sore thumb!!! A bump in the ground is an under statement, called Oker Trigg, with its famous Oak tree, it rapidly went up, & so went the speed. In fact the group of runners I’d managed to latch on to looked like a line of lemmings from the video game, all digging in hiking up Oker Trigg. With the trigg touched, (you just have to) there were a few more bits of undulating grassy paths to negotiate, before the final descent to the finish. And so with the blood rushing to my head again, me & pinkies were off, planning another attack of the last downhill descent, joining in on a few runners in front, now I’m overtaking some runners, down through the field to the last stile gate, what’s going on Lee, you’re making a move up in places, didn’t we just decide to…………….yup number 3, the blood had gone to my head & before I knew it I’m in a heap in front of the last stile, one second I was upright, the next I’m looking up at the Marshal & he’s asking me if I’m OK, (a reversed deja vu feeling of the chap so early on in the race), however I failed to pop up like that chap. Picking myself up, I lugged myself over the style & headed towards the finish line, instantly a guy in a white vest had gained on me & we were level shoulder to shoulder going for it at the finish line, I could hear cheers from fellow striders/UHTG, but was unable to keep him at bay. I was more than OK with him passing me, I’d managed to get myself round in one piece. With the finish line crossed & my Garmin stopped I made my way to meet the others. You fell a few times they said pointing to my legs, erm yes I said, several times, then looking down to see leaking knees & forearm. It’s not called a “fell” race for nothing was mentioned.

Verdict, an absolutely cracking course, that’s well marshalled, put on by a friendly running club (Matlock AC), pre info about the race was provided, you simply entered online & paid your £6 on the day.

What did I learn, oh well there’s loads, but mainly these few points,
1) Not everything is to be taken so seriously, I actually did enjoy the race (plod)
2) Be doubly prepared, keep some spare shoes in the boot of car.
3) If your offering lifts to races, you may just want to ask their shoe size

162 runners got round, led home by Greg Hopkinson of the home club in 29:33. First woman was Caroline Brock, in a new course record of 33:03 (a feat she would repeat the following day). 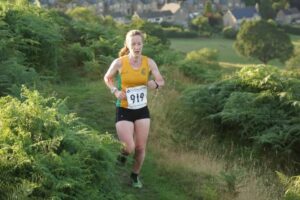