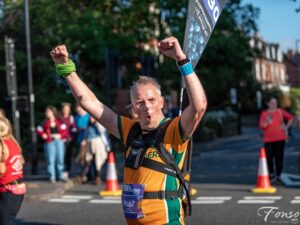 After a year or so of race cancellations, yesterday the fixture pile-up catch-up calendar delivered something special. Sheffield city centre hosted a Run For All double-header the likes of which we may never see again. With the Sheffield Half Marathon in the morning and the Sheffield 10k in the afternoon, there was an opportunity for those who love spectating to spend the whole day cheering Striders on. Or, for those with the right mind-set, an opportunity to spend the whole day running.

Yesterday was also, belatedly, the beginning of our 2021 Road Championship, which includes both races. A very quick reminder of the format: We have eight races, spread across five weekends. You can score points in each race depending on how well you do compared to the male or female winner. You don’t need to do every race, as it’s your best three scores that count towards your final points total. Male and female champions will be recognised in the following age categories: Seniors, 40-49, 50-59, 60-69, 70+. There’s also an age-graded results table comparing everyone on a fair footing irrespective of age and gender. Details of the races, which are all accepting entries at the time of writing, are on the Road Race Championship page. If you raced yesterday, you only need two more for a full set.

There’ll be race reports dwelling on the details of each race, but this post is just about the road championship. There’s far too much data to include it all here, so to get the full picture take a look at The Spreadsheet. But here’s a bit of an overview.

Six Striders stole a march on the competition by running twice yesterday: Ben Stittle, Matt Rimmer, Jim Rangeley, Brian Jenkins, Andrew Glaves, and Chris Smith. Some of these were pacing and some were racing. Huge respect to all of them for having the resilience to double up. They’re rewarded with dominance in the points and age-graded tables, at least until next weekend and our next round of championship races. 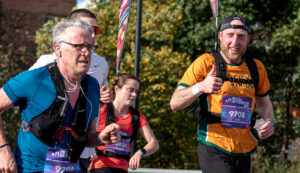 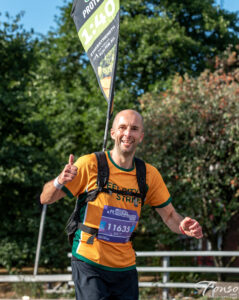 It’s perhaps worth looking beyond these six to see who scored best having only raced once, as when the dust settles and everyone has three scores counting these are arguably more likely to be our 2021 champions.

Caroline Brock scored a perfect 100 with a magnificent win in the Sheffield Half; kudos to our club captain. New member Rebecca Pease and the versatile Rachel Thorley were our next biggest scorers. Jacquie Herring, Nick Booker, Sarah Percival, Richard Pearson, and Robert Dawson also managed break the 80-point barrier. 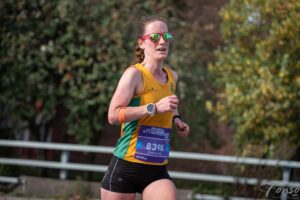 We’re also compiling an age-graded table this year, using WMA age-grading standards. This lets you compare your performance with others who may be older or younger and/or the opposite sex on a fair footing. 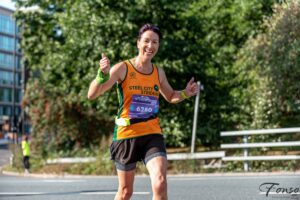 Enough of the overall picture. The Road Champs is really all about the age groups. It’s early days, and with a compressed season a lot will depend on who manages to get the races in, but we can still get a sense of how things might shape up.

In the Senior Men’s competition, behind the double-scorers Ben and Jim, Richard Pearson was our biggest-hitter, a couple of points ahead of Jordan Moat. Robert Bishop, presumably still recovering from his 28-hour 100 mile race two weeks ago, is next best, and may score bigger in future races on fresher legs. 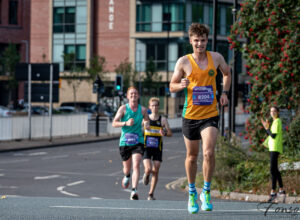 Caroline Brock’s win in the Half puts her well out in front in the Senior Women’s category, but new member Rebecca Pease and the versatile Rachel Thorley both posted high scores as well. Behind them, Kathryn Liddiard and Emerald Hutton are practically tied, with Stephanie Millar and Harriet Davies close too. 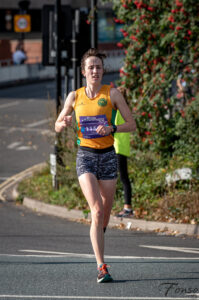 The M40 category is dominated by double-counters, at least for now. Robert Dawson looks like the strongest runner to have registered just one score so far, having broken the 80-point barrier. Tim Holt, Paul Scott, and Colin Hardy are lurking behind in case he doesn’t manage to complete three championship races.

Jacqui Herring continued her excellent form with a 1:41:04 Half to head up the F40 category. Sarah Percival’s 47:05 10k puts her close behind. Abigail Hickinbottom and Lucy Woodward both ran strong Halfs to round out the top of the table. 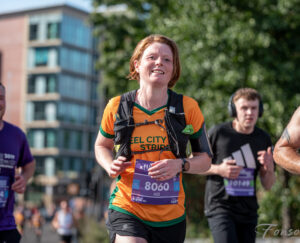 Nick Booker has been taking a break from ultra marathons to hone his speed. His 38:15 10k wasn’t quite what he was after, but double-runner Andrew Glaves aside, it was enough to put him clear in the M50 category. Wei Chen ran an excellent 1:27:02 Half behind. Nick and Wei aren’t the most prolific runners, though, and if they don’t get their three races in Sean O-Brien or David Naisbitt (or Nick Burns, or Adam McAuley…) may come through for the win. 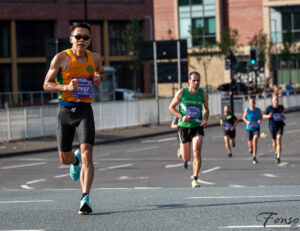 In the F50 category, Kate Scott opened up a healthy lead with her 1:45:07 Half. Caroline Greenough, Karen Clark, and Carol Haste all scored well behind her. 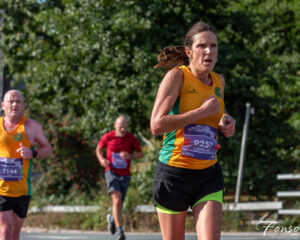 David Wilson had to work hard for his time in the 10k, but was rewarded with a big lead in the M60 category. Some of those behind him were slowed by pacing duties, but it remains to be seen whether Paul Bentley, Barry Gyte, or anyone else can mount a challenge.

In the F60 category, Kate Waddicor’s 1:57:38 Half was just pipped by Stephanie Street’s 53:43 10k. Dot Kesterton will open her account at the Cusworth 10k next weekend.

With talented runners in the older age groups, we’ve added 70+ categories to our championship this year. Our M70s were out in force yesterday, and we have the makings of a tight competition. Graham Goff established an early lead running the Half; Graham Hague and David Parry couldn’t quite match his score in the 10k, but both came close. If Michael Ingham can get injury free he could pose a threat too. 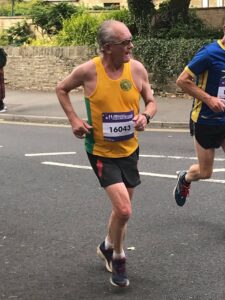 Our W70s decided not to race this weekend, but with another four race days to come there’s still plenty of time for them to join the competition.

All of this is just scratching the surface of what happened yesterday. 155 Striders ran one or both of yesterday’s races, many more than can be mentioned here. Huge respect to those who were on their feet for longer than most but still made it to the finish; that can be a tougher experience and a bigger achievement than that of those whose races are over more quickly. For the full account of everyone who ran for the club, see the coming race reports and The Spreadsheet.

One final reminder that you can find details of the events in this year’s championships on the Road Race Championships page, and that it isn’t too late to sign up for a couple more. It would be great to see some tight competitions and lots of you giving this a go, so do join in if you can. Our next races are the Cusworth 10k and the Eyam Half, both next weekend; good luck to all of you taking part.