Returning to my home town is always a blast from the past, this time I reverted back to my teenage habit of sleeping through my alarm. Fortunately my big brother was on the case and hollered for me to “get up, your 10k starts in half an hour!”. He also delivered me as near to the start line as possible just in time for a hearty rendition of “Penny Lane” with arms in the air and top notch singing that Macca would be proud to hear (maybe).

We set off at 08:45 on the dot. The course is point to point and covers the last 6.2 miles of the Marathon route. What a joy it was to be running those 6.2 without having done the previous 20 miles.

The first two miles are downhill, through leafy Mossley Hill and into Sefton Park which was all crispy and autumnal, we were cheered on by a few dog walkers which was nice. Then onwards to Otterspool where there was a particularly cool band playing, a bit like Echo and the Bunnymen, I would have liked to hang around and listen more but there were 4 miles of running still to cover.

Otterspool Prom flanks the River Mersey; true to form it was a bit gusty down there and weirdly warm too. With just over 3 miles to go you can see the finish area, although I’m sure it kept getting further away.

Throughout the course we were entertained en route by five different bands and two DJ’s blasting out motivating tunes, and all before 10am, huge kudos for them not sleeping through their alarms.

The event was really well organised with wet towels slapped around your neck when you finished and lots of goodies, I wish I had taken a bag.

I stuck around to cheer the Rock and Roll Marathon runners off and had a nice chat with Chris the Rhino before heading back to my brother’s place riding on one of Liverpool’s city e-scooters and I didn’t fall off.

First marathon, first race as a Strider, last of the Liverpool Rock’n’Roll marathons.

Before the pandemic my exercise plan was simply walking everywhere, and so last summer as daily P.E. with Joe came to a close I took up running. I found I really enjoyed running up and down the Rivelin and Loxley valleys, and had worked my long runs up to half-marathon distance by the end of the summer, but my miles nose-dived in the dark and cold of winter as my schedule became less flexible.

Complaining about this to my seasoned marathoner of a brother-in-law James, he replied “You could run the Liverpool Marathon with me”, and after some hemming and hawing here I was. Also joining us in the race was a friend Nicky, who Sheffield Runners may know: when Mayor Magid ran the Sheffield Half-Marathon dressed as a tree, Nicky was the one dressed as the Amey worker chasing him with a chainsaw. My one goal was to beat four hours, though my training plan was “for” a sub 3:45 and I hadn’t ruled that out. Nicky had been doing ultra-marathons and was running a slower pace she’d gotten used to from that; James protested he hadn’t trained much this time around and would certainly be over four hours.

The race started from Albert Docks at the very reasonable time of 10am, but wound up starting about 10 minutes late (the half marathon was still leaving at 9:30), which gave time for the requisite multiple portaloo trips. The weather was a bit chill (I waffled long and hard about short vs. long sleeves) and threatened rain, but it warmed up slightly and the rain never appeared, so it turned out an excellent day for the race.

I can barely remember anything specific about any of the bands playing along the route, but it was always a big energy boost to go by them. If I knew the song they were playing I’d loudly sing the part of an instrument, and if they were taking a break and not playing I’d feel a little deflated. There weren’t many crowds cheering until right at the finish line, so the bands were a welcome replacement source of energy.

Most of the first half of the race was an out and back to the football stadiums. Being both American and not much of a sports fan, the shiny trophy they had out on display as we went through the stands at Anfield meant little, but as a Sheffielder the Hillsborough monument just outside meant a bit more. Passing the four hour pacer around the turn-around took a while: they had a huge crowd following them, and I was sticking to my plan and not going much faster than they were. As we headed back into town and passed the Cavern Club, and then headed out in another direction through Chinatown I felt good and sped up (as planned), but must have sped up too much: as we winded through Princes and Sefton parks for miles and miles I slowed more and more, and the tips of my fingers started to tingle and felt slightly numb. James passed me, surprised at himself. The course veered out to the very end of Penny Lane where there was nothing special to see at all; to compensate they played “Penny Lane” on repeat.

By the time we reached the last few miles, a straight flat finish along the Mersey I was really struggling, and could really have used some crowds cheering or bands playing but didn’t find much of either. I kept it up by following another runner for a mile or two, but eventually I started walking for stretches of a minute or so at a time. The 4 hour pacer passed me back, this time with virtually nobody following him, but he’d started earlier than I was and I knew I was ok for my sub 4:00 goal if I didn’t walk too much.

James wound up crushing his PB by nearly 10 minutes, and Liverpool demolished Man United 5-0 that afternoon, so the joint was very happy indeed when we got pizza and beer that evening. Haven’t decided whether I’ll run another, but I’m hoping that trying out some of the Strider group runs and Parkruns will keep up my running motivation through the winter this year.

Provisional results for all distances are available on the Rock ‘n’ Roll Running Series website. 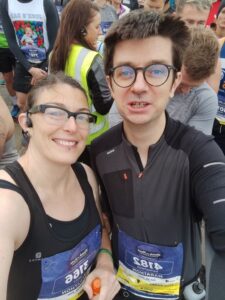 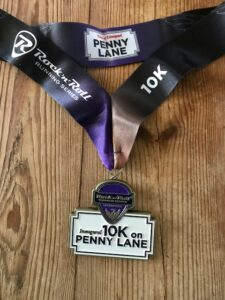