Laura: Thankfully this race does what it says on the tin. It’s at Rother Valley and it’s relays. Apart from establishing those two basic facts, I signed up for this not really knowing what it involved and having never done a relay event before.

Like many people it was my first race back after not only the covid break but also a year off prior to that with an injury. What better way to reintroduce yourself to racing than to hammer it round a flat, fast route, on a warm and muggy June night, I thought. And hammer it round we all did.

As I pulled into the car park (a patch of grass kindly set aside for us runners near the start), it turns out lots of other people also thought it was a great idea, as it was awash with hundreds of runners and spectators in variety of South Yorkshire club colours, walking, jogging and sprinting their way to the start area.

I made my way over to the Striders huddle (someone had kindly erected the massive green and gold flag so we couldn’t get lost), where I was greeted by lots of new and old smiling faces. Neil Schofield was busy scribbling on a bit of paper and handing out race numbers, while everyone else was chatting and laughing, as if they hadn’t seen each for over a year.

If I’m honest, I’d tried to get out of this one all day – I had a tight calf, it was hot, I was worried everyone expected me to run ‘fast’ and I had no idea how the event actually worked.

While I was still figuring out what the actual jeff was going on the first set of runners set off from the northern lake for one, anticlockwise, 4.7km loop of the lake (Rother Valley Parkrun backwards, without the add on at the end). After what seemed like about five minutes some very young, fit looking men sprinted past us to lots of cheers and rounds of applause, having already completed their lap.

By this point I had established that there were several relay races taking place at once, made up of different age categories of either male, female or mixed teams. Each relay team consisted of three or four people with the same race number but starting with different letters i.e. A, B,C, D (denoting their relay position), and that each runner had to do one lap.

While the As were out running, Bs were waiting in a pen at the finish/start line, and so on. As the runners approached the finish their number was called out and the next runner lined up at the start, ready to be given the signal to GO, GO, GO.

I was placed into a mixed team in position D, so after doing some basic maths I decided I had a fair amount of time to wait around, chat and eat snacks (warm up). Thankfully I timed my snack break well, as Chris Bakes Cakes appeared with a lovely selection of homemade brownies and flapjacks for everyone (thanks Chris). After a quick warm up jog with John Kilcoyne, who had kindly explained to me how it all worked, I headed over to the pen to get into position. I was on what you might call the graveyard shift, so it was pretty empty by this point. Opposite us was the ‘recovery zone’ where you basically sat and died from heat exhaustion for a few minutes post-race, before being ushered away to make space for the next batch of finishers.

It wasn’t long before my C runner Laura Rangeley came spiriting to the finish, so I got lined up ready to start. The man giving the go ahead was taking his role very seriously and carefully ensured I didn’t start one millisecond before Laura had passed the finish line. Before I could smile and say hello, he barked ‘You can’t start yet’.

Once I’d been given the go ahead, I sprinted off. Within about the first minute I realised I was running far too fast, so slowed down and settled into a more comfortable, uncomfortable pace. By this point most people had done their leg so there were very few people in front of me to chase (or behind me), however it wasn’t long before another Strider overtook me. A short time later I found him bent over on the grass in some discomfort. After checking he was ok, I carried on, and soon he was back overtaking me again.

After smiling and thanking the marshals dotted round the course, about half way round I started questioning my life choices. My calf was holding up ok but the pain of running fast started to kick in and combined with the heat it did not make for an enjoyable last km. As I approached the last stretch there was a tiny little incline (that felt more like I was running up Blake Street), followed by a delightful headwind. Thankfully by this point the crowd reappeared again, as did some words of encouragement ‘Go Laura’ or ‘Go Strider’ (from those who either can’t remember your name, or have never met you).

23 minutes later hell was over and I collapsed into the recovery zone for a lie down. By this point quite a few runners had left, but those that were still around seemed in joyful spirits and pleasantly surprised with their times, given not many people have raced hard over the last year.

After such a long time out from racing, the time didn’t matter to me at all. I was, I’m sure like a lot of people, just happy to get out of the house, do a bit of running and more importantly catch up with friends and clubmates, who I haven’t seen for far too long. Long may it continue, just in slightly cooler weather please.

Kate: ROTHER VALLEY RELAYS 2021 FV55 A TEAM – Kate Scott, Dot Kesterton & Kate Morris. Otherwise known as a Dot sandwich. We rather fancied ourselves as a crack old birds team .. a delusion fuelled more by blind hope than evidence of recent talent. On the journey to Rother Valley Dot confessed to heightened nerves .. un-characteristically, I wasn’t feeling nervous at all … not necessarily a good thing (more on that later …)

As instructed we made our way to the meeting point – depicted by the SCS flag looming in the distance like a shining beacon luring in the gold and green army (I use the term ‘GOLD and green’ as opposed to the somewhat less romantic, granted, yet wholly more accurate alternative). After the usual faffing with numbers and safety pins Dot and I partook in a brief warm up in the form of the traditional ‘bog trot’. Unfortunately, we met a few friends on the way and after a distinctly dry period of pre and post race gossip opportunities we rather lost track of time. Suddenly aware of the imminence of the FV45/55 wave start, we dashed over to the line to hunt down our third team member – t’other Kate, who was due to embark on the vitally important first leg. It took a while as contrary to her usual choice of dazzling dayglo leggings, Kate had opted for comparatively subtle green shorts, thus the only option left to us was to scan the crowds for her trademark purple locks (your roots need doing Kate – just sayin’).

Kate set off at a rate of knots … the pace of her preferred 800 meter track event. Had the race been a mere 800 meters not the stipulated 4,710, she would have won her leg in spectacular fashion. Unfortunately, Kates glee at leading the field faltered somewhat at the first bend. Heroically she re-composed herself and came home in an astonishing time of 21:02, the fastest FV55 and 5th overall in her wave! Sadly I missed this impressive feat of athleticism as I was desperately attempting to accomplish one of the less savoury, yet imperative pre-race rituals. My lack of nerves meant this endeavour wasn’t as forthcoming as usual. Eventually I admitted defeat and jogged along to the hub of activity around the changeover point.

Arithmetic having never been a strong point I ditched the idea of a warm up for fear of missing my incoming runner. I stood on tiptoe and craned my neck in order to guarantee a first glimpse of Dot. I’ve known Dot for quite some time and thought I could spot her distinct, quirky running style from a mile away. Now either every one of you lovely Striders runs like Dot, or I shoulda gone to Specsavers, because every time a yellow, sorry, gold, vest came in to view I leapt in to the air exclaiming ‘Here’s Dot!’ to which the standard response from my marshalling mate Fi was ‘that’s not Dot’. When the real Dot came into view (confirmed by Fi), I eagerly took my place on the start line. Stiff as board as I don’t think by any stretch of the imagination hopping up and down on the spot in gleeful anticipation of an incoming Dot can constitute a warm up, I shuffled off. Severely doubting that an old lady in cheat shoes was quite the vision that Nike had in mind, I was hoping against hope that I didn’t look too much of a knob. Unlike Dot, who clearly couldn’t give a flying fig if she did … because to the shock of the remaining spectators, she didn’t stop .. she carried on running in order to notch up the remaining 290 meters for her YVAA virtual 5k. Once cropped to where normal people stopped running (the finish line), her time was an astonishing 21:46 – how’s that for someone knocking on the door of 70 years of age?!!

Neither t’other Kate, Dot nor I had had the foresight to keep an eye on where we were placing compared to our rival teams. In fact keeping an eye on each other was proving to be not quite so simples. I had passed a few lovely ladies on my trot around the lake, but I had no clue where I was in the field. The results showed that not only had the FV55 Striders A team absolutely bossed it coming home in first place, but so had the B team coming home second! Now to that, lovely readers, there is only one fitting response …. UP THE OLD BIRDS!!! 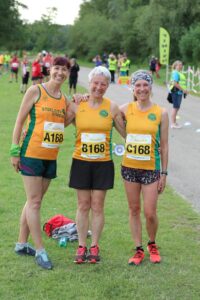