Running events are returning slowly around Europe. One such popular destination for good running is Rotterdam. On October 24th Rotterdam hosted the 1/4 and Full marathon races. The full is very popular as it is a fast course and is a qualifier in good for age categories for some of the major marathons (eg Berlin, Boston).

2 striders visited the city. Richard Pegg entered the full in a hope to get good for age (sub 3.50) for Boston. Nancy Stuart entered the quarter marathon. They were there with 2 non striders, Carl Thompson and Teresa Mitchell. This couple can often be seen at striders events. Carl was hoping to get good for age for Boston AND Berlin. Berlin is more stringent with a 3.25 entry standard.

Travel to Rotterdam can now be undertaken with Eurostar direct from St. Pancras. So letting the train take the strain is well worth it. The downside is that check in and form sharing at St.Pancras is around 2 hours.

Hopefully in the future the bureaucracy around travelling abroad will be reduced. However, at the moment, it’s a nerve-wracking journey through form filling, antigen tests, locator forms and qr code retention. Through the various extra steps and tests the trip would roughly cost an extra £150. Also consider the tension that is undertaken waiting for an Antigen test made several hours before departure.

Despite these barriers our 2 determined runners got to Rotterdam on the Friday before the run fully vaccinated and tested. The Expo is open on the Friday so afforded a good chance to get numbers and check out any purchasing options. The Expo rated very poorly compared to others with little merchandise and not much in terms of advice or shows. Anyway the numbers were picked up. It seemed the 1/4 marathon had no t-shirt which was a disappointment.The race is sponsored by Hoka. It seems they have had supply chain problems so are under stocked. Richard and Nancy visited the local running shop and spotted a really good short worn by the staff and a very good ASICS ladies running jacket. More on these later

On the Saturday there was the chance to try out the excellent local parkrun at Kralinge Bos followed by a good breakfast at the Nightingale Pancake House. Fortunately, a local sports bar was showing Chelsea V Norwich City. Richard was keen to watch this. However, things took a turn for the worse. Norwich lost 7-0!! The rest of Saturday was taken up by relaxation.

The Sunday was almost perfect for running. Cold at the start but warming up with no rain. Nancy was first off on the quarter marathon. It was a busy race with some congestion on the way. Nancy got a respectful 1.04.27. If we are not mistaken this must be a striders club record!! The race was won by Liam Dee from the UK in the men’s race with a time of 30.56 and by Marije Himen from the Netherlands in the women’s race with a time of 37.57.

Second off was the marathon. Richard wanted to average 5.20min kilometres to get under the qualifying time. This was achieved surprisingly easily considering the poor training regime. The only panic was having to get a move on in the last kilometre as the distance ran was well over 42.21km. The men’s race was won by Abdi BASHIR originally from Somalia but now with Belgian citizenship with a time of 2.03.36, a European record. The women’s race was won by Stella Barsosio from Kenya with a time of 2.22.06.

The race is very well organised having plenty of water stations and great support from locals and a whole range of music. One point to note is that Refreshment is the term used for a place where you get a wet sponge only!!

For the record, Carl ran in 3.18.33 and now qualifies for Berlin And Boston and Richard ran in 3.47.38 and has a fighting chance of qualifying for Boston.

All in all a great weekend in an enjoyable City doing some exciting and rewarding running.

As a footnote to the lack of shirt for the 1/4 marathon, Nancy and Rich purchased a jacket to soften the blow. Big bonus was persuading the shop assistant to donate a limited edition Hoka running shirt, exclusive to to shop.

10,867 runners took part in the Rotterdam Marathon, and a further 7935 entered the quarter marathon (details of male and female first finishers in Richard’s report, above).

Full marathon results are available on the Sporthive website.

Full quarter marathon results are available on the Sporthive website. 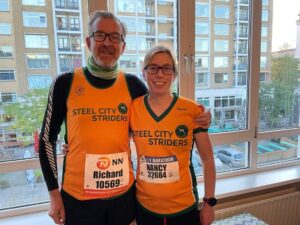 Richard and Nancy in the gold and green 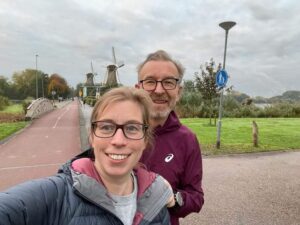