Back in the dim and distant past of 1983 I was a 19 year old student at Sheffield University. This student was very overweight so I took up running and 38 years later I still haven’t stopped. As a student I liked to run in Endcliffe and Bingham Parks, I would see signs for the “Round Sheffield Walk” and I thought “wouldn’t it be fun to try and run all the way round this path?” Of course I never did.

I graduated in 1984 but on trips back to Sheffield for conferences and to visit my brother, when he followed me to Sheffield University, I would run down Memory Lane in Endcliffe Park. Then in 2015 I returned to Sheffield with my work, for the first few weeks l lived a mile from Endcliffe Park so I got to run there again. I then joined Steel City Striders and heard about the “Round Sheffield Run.” I was intrigued about the RSR, although a race mostly off-road with steep ups and downs wasn’t really my type of event. I entered the RSR in 2019 but had to withdraw due to injury. I tried again for 2021 and got a place. Finally a chance, 38 years later, run all the way round.

Saturday 26th June, back to Endcliffe Park and just after 9.00am I was in a queue of socially distanced runners getting ready to start the RSR. Off I went on the running path of my youth, I felt OK on stage 1, although for some reason it was a bit steeper uphill than in my student days? Remarkably quickly to the end of stage 1 by Forge Dam. I kept running in the transition and soon onto stage 2 through the Porter Valley, this was as far as I got as a student. A much harder stage than stage 1, steeper uphill and rougher underfoot conditions, most people were walking for the last bit. A drink of water and banana at the top then jogged off through Ringinglow to start stage 3. A nice path down to Whirlowbrook Hall, I don’t run very well downhill, lots of runners came zooming past and I had to be careful on the steep bits but I got down in one piece.

Over the busy road onto stage 4 into Ecclesall Woods. Tough going at first on a rough, narrow path with fell runners zooming past. It got easier further into the woods on more familiar ground and I was moving well just before the finish near Dore Station. Up the endless steps to start stage 5, tough going on the narrow path but it got easier when the path got wider. I zoomed down Beauchief Drive to the Abbey going a lot faster than I usually do in training, kept going fast on the path through the forest by the golf course. It was very hard work on stage 6 in Chancet Woods going uphill, but it got easier as the stage progressed. Over the road into Graves Park for stage 7. This was great fun, mostly uphill and fairly good underfoot, I just slogged away uphill passing loads of runners who had slowed to a walk. Very tired at the end near the Graves parkrun start.

Then, after a drink,  I jogged the long transition to stage 8. I was not looking forward to this, a long off-road descent, I really struggled on my reconnaissance training run when it was wet and muddy underfoot. I got down in one piece by sticking as far over to the left as possible to keep out of the way. Very tired on the transition to Meersbrook Park, a very slow jog. Stage 9, a fantastic view of the city and a very uncomfortable descent, my legs were very tired by now.

Jogged over Chesterfield Road and Abbeydale Road before the start of stage 10. A slog uphill on the road, off-road along Brincliffe Edge, uncomfortable downhill through Chelsea Park to the end of stage 10 (where I spent 5 hours as a volunteer the next day). Almost there, very slow jog downhill to Hunter’s Bar and back into Endcliffe Park. I did speed up a little for the final stage, although describing it as a sprint would not be correct, over the line and I made it! 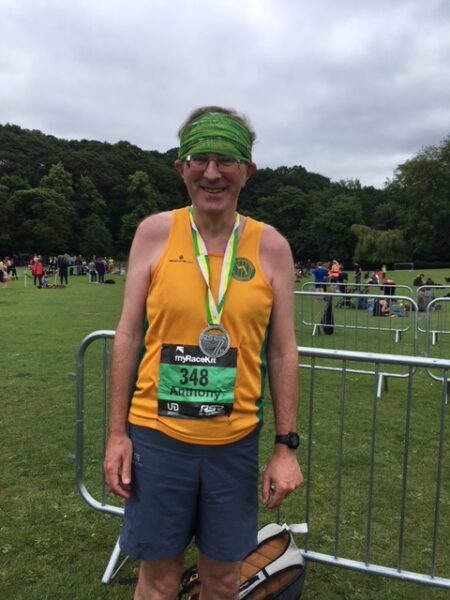 The full results are here and the Striders results (in order of category placing):