A field of 10,086 runners lined up on The Mall for the 2021 Royal Parks Half Marathon, a generally flat course which takes a winding route through four of London’s Royal Parks: Hyde Park, The Green Park, St James’s Park and Kensington Gardens. A race which prides itself on it’s green credentials, the inaugural event took place in 2008, and has since raised over £50m for over a thousand charities, including some which help with the upkeep of the featured parks.

Provisional results can be found on the Sporthive website. 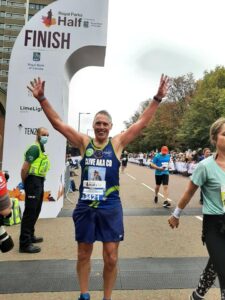 Clive Downing celebrates at the Royal Parks Half