With its fast, flat, rural course this no-nonsense race has been a personal favourite over the years providing a solid source of pb’s for those fortunate enough to remember what they were. With no razzamatazz, only 130 finishers and not a t-shirt or medal in sight, the event appears to be low key but there was nothing understated about the race with five men under 25 minutes and three women under 30 minutes.

As a spectator this year, we witnessed the leaders speed past at four miles, with two lads running neck and neck. This could be interesting I remarked to the marshal wishing the thing was on tv so that we could watch the final stages of the race unfold. As it was, after several attempts, Linton Taylor (Lincoln Wellington) eventually managed to get a gap of five seconds on his opponent crossing the line in 23.51. Not a mis-print and I had to remind Neil Schofield that this wasn’t a Parkrun.

Our own Striders generally fared well on a blustery day. Of note was Nick Booker (30.18) coming down in distance as his usual preference is for ultras although he wasn’t sure whether this was a pb or not unlike Sam Brown who surpassed his previous best by thirty seconds. 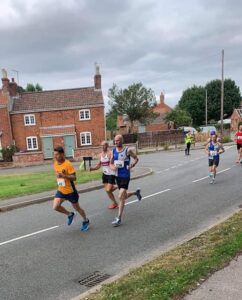 First woman was Sophie Wallis (Lincoln Wellington) who’s 27.54 placed her third in the rankings for five miles this year. Further back there was another startling performance from Tony Whitehouse (Totley) who, as an M65, ran 30.26 which puts him top of his age group for 2021. Tony has joined Striders recently but only second claim so no club record for him which is a shame.