Whilst most eyes were fixed on Sheffield this weekend, down the M1 the Robin Hood Nottingham Half Marathon celebrated its 40th birthday on its usual late September date. This year there was also a Mile Challenge and Mini-Marathon to keep the family occupied but sadly no 26.2 mile event.

Starting and finishing on the banks of the River Trent, the course soon climbs up past the castle and Robin Hood statue all the way to Woolaton Park of National Cross Country fame with deer and Wayne Manor. With numerous right angle turns (an average of two per mile), a couple of u-turns and, according to Strava, 156m of climb, it would be difficult to describe this as a particularly quick track. The race is well supported however and with name emblazoned on the race number it was easy for spectators to be specific with their encouragement or abuse with “Hurry up Sam, you’re not even the quickest” directed by a five year-old being one Strider’s favourite bit of heckling. Sam was hurrying as best he could but with this being his longest run for some time all he really got for his pleasure was a medal and a vibrant purple blister on his big toe as the t-shirt was an extra £10.00 on the race entry fee. 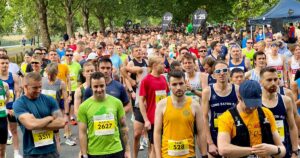 Sam waiting with other competitors as the start is delayed to 09:40 due to an “obstruction on the course”. (Photo Nottingham Post, official race photo was £13.99)

With 3867 finishers, both race winners ran pb’s with Megan Rosier (Redhill) in 1:25:49 and William Strangeway (Lincoln Wellington) in 1:07:41. According to the provisional results, two Striders made the trip down the M1. Will update when official results are out.