This was the first since XC league fixture since Striders claimed the South Yorkshire Champions title way back in the carefree days of December 2019. Quite a few things have changed since then, including quite a few runners moving on to pastures new, but we still managed a fantastic turnout on a surprisingly warm, sunny day in north Sheffield. The course consisted of a big climb to the top of the park, a long steady descent through the woods and an undulating loop back round to the playground to complete the lap.

Being the first fixture, the courses were (slightly) shorter than usual. The women ran 2 long and one short lap; men ran 4 long laps.

Notable performances from Striders included Caroline Brock and Abbie Pearse battling it out throughout the race, to take 4th and 5th places, with Caroline just pipping Abbie in the final straight. This was despite them both having run the brutal fell relays in Tebay just 24 hours earlier. Kudos also to Dot Kesterton, miles ahead of her age category competitors and plenty of younger runners too. Another person who ran the fell relays, Paul Middlemas, led home the Striders men. Given Paul could barely walk after his run the day before this was a fantastic achievement. Congratulations to Clive Downing too, who competed the men’s list of finishers and proved XC is for everybody, regardless of speed. There are also more club mates to cheer you home the later you finish! 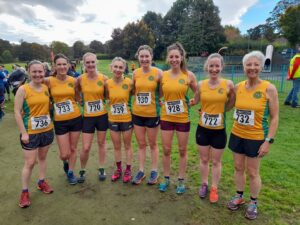 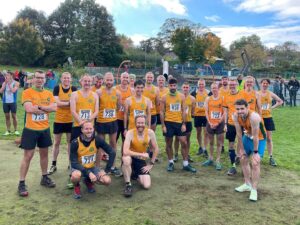