They say that you hit the sweet spot in a half marathon just a few weeks after completing a full marathon. And so it turned out for Sarah and me as 3 weeks after running in the York marathon we both ran (personally) very fast times in the Monsal Trail half marathon.

This local, low key race is an out and back route along the Monsal Trail from Bakewell station to Miller’s Dale station with stunning views, the Monsal Viaduct and 4 tunnels to look forward to in each direction. The trail itself is fairly flat and is along the former Manchester to Derby railway line which was closed in 1968 but which has been upgraded in recent years to give it a good surface for walkers, runners and cyclists.

Having to park at Hassop station a mile from the start allowed for a proper warm up before the race and, with light winds and mild temperatures,everything was in place for a good race. Sarah smashed another 5 minutes off her previous p.b. at this distance; I ran my fastest half marathon in over 15 years. I personally much prefer the low key races to the mega events that seem to dominate the half and full marathon scene at present and thoroughly enjoyed the day.

Striders Jim Danson and Peter Keats were also in amongst the 166 finishers in the half marathon. There was a 10km race which set off 10 minutes after the main race and this included Striders Rob Dawson, who was second overall, and Joel Driver amongst the 70 finishers.

For the half marathon:

Full results for both races can be found at: https://www.nice-work.org.uk/races/the-monsal-trail-half-marathon-Sat/2021/results 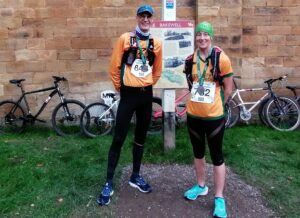