The Saddleworth Round is a challenging, category BL long fell race over boggy moor, fell and trail (17.8 miles, 3,200ft). I’d booked onto it last year, and it came tantalisingly close to actually happening, but the sudden rise in Covid cases in the Oldham area last August meant that it was cancelled just a few days before the race.

Since last year, I’d managed to encourage Alison Barrett to book onto the race so the two of us set off at a respectable time on Sunday morning – the race doesn’t start until 11 and it’s just over 1 hour’s drive away.

Something didn’t quite add up though. The website clearly stated ‘This is an event in the high summer so bring sun cream and a water bottle’. However, it was absolutely pelting it down! Driving across Saddleworth Moor there was nothing but white fog. The sun cream stayed at home.

It’s a fairly new race and had fewer than 100 entrants, so registration was easy and everything was well prepared, we were even given a map. Unfortunately, by the time I needed to use the map it was nothing more than wet pulp!

The weather had dried up at registration but as we set off on the 10 minute walk to the start, it started drizzling and then by the time the RD was doing his talk, it was really coming down. We were warned about potential river crossing hazards due to the heavy rain that morning, and told to look after ourselves. He also mentioned it would be ‘a bit muddy’. The guy next to me then said ‘when someone who organises fell races warns you it might be a bit muddy, you know you’re in trouble!’. That made me chuckle. Then the RD sounded his hooter, and we were off!

The first 6 miles of the race are tough, climbing 2,000 feet over two ascents and one tricky descent. I waved goodbye to Alison early on, and settled into the field. The ascent up above Dovestones reservoir had me questioning my life choices, but I soon forgave myself as I began the steep but fast descent to Chew Brook. This was followed by a long but less aggressive climb up to Chew Reservoir, where two marshals were doing a great job of cheering us on in what were absolutely miserable marshalling conditions.

The following stretch took us SE to Laddow Rocks before turning NE to Black Hill. This was my favourite stretch – along the Pennine Way – technical running and multiple fast flowing river crossings. At Black Hill, the route took us NW across Wessenden Head Moor to the Holmfirth Road crossing, where Mountain Rescue were stationed and cheering us on. This was the toughest and most remote section of the race, and at that time it was bleak and very windy, with intermittent sunshine. We were up and down peaks and troughs of black bog, sapping all our energy. At one point I went into a bog up to the small of my back. I was knackered by that point and it felt like a warm bath – I really could have stayed a while but reluctantly clambered out!

After the road crossing the route took a slight downhill trajectory. I was wearing my Mudclaws and my feet and toes were sore from the relentless flagstones in this section. But in spite of this, I made a lot of ground in this area and started to catch up with some of the guys I’d lost earlier. By the time we’d passed Redbrook Reservoir and turned south for home, I’d overtaken about 7 people and was out on my own. I took a wrong turn and had to consult the map, but it was a mass of wet pulp so I took a lucky guess after wasting 2 or 3 minutes fretting.

The next couple of miles were tough going through fields with enough of an uphill gradient to force me to walk. But, having reccied the race before, I knew what was coming so I dug in. A couple more fields and a short, steep uphill road section, then the finale – a 500m delightful downhill stretch on the aptly named ‘Running Hill Gate’, with a pub and a free chip butty waiting at the bottom!

I enjoyed the race and would definitely recommend it to others who enjoy this kind of type 2 fun. It’s not that far away, it’s a beautiful route and it’s cheap and well organised.

There were only 83 runners, including 16 ladies and 5 DNF.

Alison and I put on a pretty good show, Alison taking 3rd lady and myself 5th. 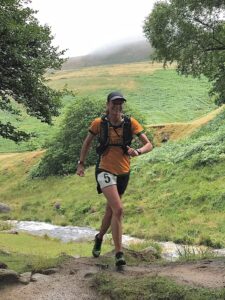 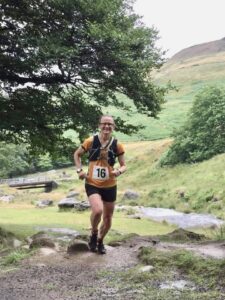