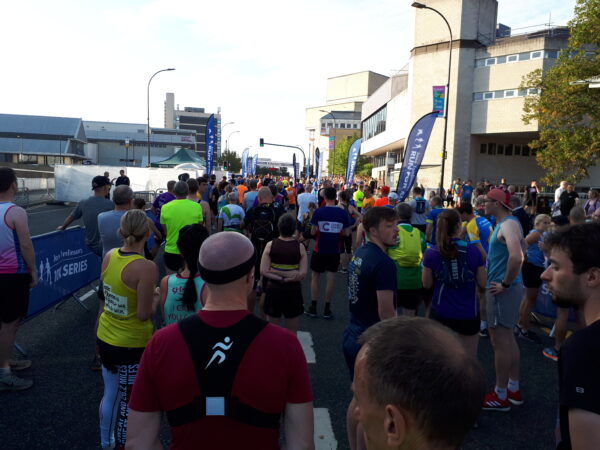 Firstly this “race” is in fact a combination of two different races: the Sheffield Half Marathon and the Sheffield 10k, which together constitute about 73% of a marathon.

These two races are traditionally at opposite ends of the racing calendar, but due to the pandemic du jour, the Half was moved to the same day as the 10k. I initially suspected that both races would be run simultaneously, but no, it transpired that it was actually possible to do both. This appealed to me for several reasons. Firstly, there hasn’t been a Sheffield Marathon since 2003 (according to Wikipedia) and the combination of factors which led to the events being held on the same day is hopefully not going to happen again any time soon (fingers very much crossed), so it was an opportunity not to be missed. Secondly, my marathon training isn’t quite progressing to plan (I can only blame myself) so a good old-fashioned “long run” was exactly what was called for.

Part the first: the Sheffield Half Marathon

After a Striders team photo on the steps of City Hall, we were sent off and told to get on with it.

The runners formed-up in waves, but this was not enforced as thoroughly as previous runnings of the race, so many slower racers got considerably closer to the head of the queue for the start than would be usual (certainly not in the last three times I have run the race). The race started (at 9:30 am) and runners headed-off towards Ecclesall “Eccy” Road where a highly supportive crowd laid in wait. After that Ecclesall Road South provided a foretaste of what was to come, with a gently increasing gradient. Then the race moved on towards Ringinglow Road with its near-continual ascent (and false summits just to raise your hopes, only to dash them), most definitely the most challenging part of the course.

The sight of the left turn near the Norfolk Arms is one to lift the heart, and marks the end of the up-hill slog, and the highest point on the course. The route then progresses down rural roads with views that make the whole experience worth it. It is mostly downhill with a few uphill parts that are nowhere near as challenging as the infamous Ringinglow Road. Dore is next on the route, and then back along the route you came out on, back down Eccy Road (more crowds) and back to the City Centre finish.

I completed the half marathon in 1:56 (my personal course record).

Part the Second: the Sheffield 10k

After whiling away the rest of the morning enjoying the city centre ambiance, the time for part 2 of the challenge came, and after another Striders team photo it was back to that morning’s start line, with timing markers along the route to the start so runners could identify where to start from, bearing in mind their estimated finish time. The race started at 1:30 PM, and was my first time on this particular route (and to be honest my first ever 10k race). The route mirrored that of the Half marathon that morning (including the full length of Eccy Road), but turned right on a route skirting the boundaries of Endcliffe Park.

A freshly tenderised ex-squirrel provided an obstacle to be navigated around just outside Halifax Hall (roadkill : tick) and then back to Eccy Road and back along the same route as used in the half marathon, back to the same finish.

Overall, the combination of the two events provides different issues above-and-beyond the combined distance. The Half Marathon is clearly the most challenging part of the combined event, and I was lucky to get the hardest bits out of the way fairly early, meaning that I was confident that during the 10k, the worst was behind me. Like any long-distance (and arguably any other) race, you have to manage your expenditure of effort, ensuring that you have sufficient “left in the tank” to complete the task, possibly even moderating your effort expended (when required). I personally prioritised a sub 2-hour half marathon over a fast 10k.

The down-time between the two races proved to be both a blessing and a curse. I had the chance to have a light meal and drink (good), but I did have to “warm-up” more thoroughly before the 10k to offset the stiffness resulting from that morning’s efforts. Also, in the 10k most of your fellow competitors are coming to it as their first race of the day (and most of your fellow half marathoners will be calling it a day before lunchtime). Bear this in mind when judging your pace, and don’t feel compelled to move away from your plan (unless of course you think you can get way with it).

I thoroughly enjoyed the event.