The Manchester Marathon is normally run in Spring, but due to COVID, was moved to October this year, though it’ll be back in Spring of 2022. It gained a degree of notoriety for running a short course, not once but twice, a few years back, but has more recently earned a reputation for being a flat, fast course with PB potential.

Ongoing COVID concerns meant that this year’s event wasn’t altogether straightforward. The start was pushed back to 10.30, to accommodate the half marathon being run on the same day. Runners were also set off in a series of staggered starts, which meant that some folk didn’t cross the start line until 12.30, and would be finishing in near darkness.

The drive to Manchester early on Sunday was deceptive; grey cloud glowered over the Woodhead route and the last of some overnight rain was just clearing as Manchester appeared in the distance (seriously, how far away is Beethams Tower visible from?). However, by the time of the first of the race starts, the cloud had dissipated and the temperature was climbing fast in the sunshine (cue slightly ominous music).

The route (altered for this year I believe) starts near the two Old Trafford stadia, then takes you initially into the city centre (where the support was amazing) before heading back through Salford. From there it’s out towards Altringham, Sale and Timperley (where I was almost tempted to stop and admire the Frank Sidebottom statue) before the slog back to the finish next to the old Trafford cricket ground.

The consensus seems to have been that for most, it was a tough day at the races. The heat certainly took its toll, particularly combined with the late starts – plenty of finishers complained of cramp and struggling with nutrition. The last 10km seemed have more that the usual number of runners reduced to run/walking towards the finish. That said, there were some excellent performances from Striders too. A good number of folk I’ve spoken too have already signed up for next Spring’s event – some will no doubt have scores to settle.

5037 runners took part in the Manchester Half Marathon. First place went to Simon Crawford (no club affiliation) in a time of 01:08:36. First female finisher was Martha Coyle (also unaffiliated) in 01:21:07. Four Striders took part, with two, Philip Cooper and Steve Canning, finishing in the top 30 overall.

13855 runners took part in the Therme Manchester Marathon. First over the line was Lewis Gamble-Thompson of New Marske Harriers in 02:25:11. Winner of the womens’ race was Hannah Price of Bury AC, finishing in a time of 02:50:13. Twenty-two Striders lined up for this one, the quickest being Nick Booker, with a time of 03:04:28. First female Strider was Daisy Crowson in 03:43:20.

Full results for the Manchester Half are available on the sporthive website.

Full results for the Therme Manchester Marathon are available on the sporthive website. 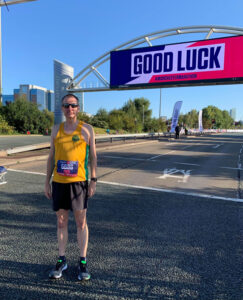 Adam McAuley on the start line.