The Vale of York Half Marathon is advertised as a fast, flat, PB loving half marathon which for a couple of Striders on Sunday turned out to be the case. The race falls 3 weeks or so before the busy Marathon month of October depending on which one you may be doing so fits nicely for anyone wanting a marker of where they are at before the full marathon.

The race start was nice and early at 9.30 with the race HQ open from 7.30 for race number collection and it’s a fairly easy run up the A1 particularly on a Sunday morning. I set off at 7:30 and was parked up for 8:20. The parking is basically a very bumpy farmers field which I’d imagine after a lot of rain would be a bloody nightmare but as it happens it was very dry and wasn’t a problem. Getting there early meant it was just a couple of minutes wait to collect my number and the small amount of portaloos were at that point still quiet so no problems there either. The event info we received beforehand stated we were to remain in the car park and were not to walk on to the road as this would impede car park entry. We would then be called at 9:15 to gather in the assembly zone, from where we would be walked to the start at 9:25. It was to be a mass start, no waves.

The general consensus from chatting to other runners parked nearby was that if you tried to warm up on the field you would almost certainly roll an ankle and not make the start line though this didn’t deter some bloke from attempting the carioca drill. He wasn’t having much success so I had a wander over to the road and was pleased to see plenty of people making their way out on to the surrounding roads to get a few miles in so decided to join them. There were plenty of officials around who didn’t seem too concerned and the roads around the course were to be closed from 9am so it was very quiet.

Warm up done without rolling an ankle and back to the car for the last bit of prep and we were called to the gathering zone. There was by now big queues for the toilets so the start was delayed a little to allow for this and also for one of the paramedics, who had parked his 4×4 about 20 yards away from the start line! This was hastily moved and we were off for 9:35

There isn’t much to say about the course itself other than it is pretty much what you would expect from one of these flat races out in the country. Open fields, little villages and pockets of spectators. On a windy day it could be a bit of a struggle with very little in the way of cover apart from a section of around a mile where Scalm Lane runs through the middle of a wood. This did though provide some welcome shade as the sun unexpectedly came out not long after the start. You do a 4 mile loop where you come back past the start line and then head on out to a bigger loop. There are a couple of small climbs just after half-way but these are up and overs so you are soon going back down once you get to the top. Bottled water was provided at 3.5, 7 and 10 miles. These were the quite tall bottles with a lid on where you end up squeezing the top half out just so you can drink it on the run without it going all over your face, but there was plenty to be able to have a drink and pour some on the head as the temperature rose.

Somewhere between mile 11 and 12 you approach a T junction where you can see runners further up the road turning right at the T but can also see runners in front of them going across the T from right to left and you can’t help but try and work out how far they are going right before coming back to the left. As it is, it’s only about 40 yards from the T before you reach the switch-back but at that point when it’s starting to hurt you could really do without almost coming to a complete stop but you dig in and get the legs going again. A long straight road and then you turn and briefly share the road with runners a couple of miles behind you going in the opposite direction and on to the loop with the dreaded T junction. Turn again after a short while and then you are on the road to the finish, though it feels like a bloody long road!

At the finish there is bottled water and a table with various chocolate bars for you to choose from, I opted for a KitKat, force of habit as they aren’t as bad as the others for calories. Should have gone for a Twix in hindsight!

After catching up with Frances, Paul and Tom at the finish and a very half hearted warm down I decided to get away as I’d imagine exiting the car park (field) once the bulk of runners had finished would be a bit of a pain as I found at Wilne 10k a few years ago. On the road and back home for 12:30, got to love an early start.

The race itself was £25 for affiliated runners £27 for non-affiliated and an additional £10 if you wanted the technical t-shirt. There was also the offer of a finishers’ medal but if you wanted they would not give you the medal and donate £2 to a charity instead. From what I saw, most people had opted to take the medal which turned out to be wooden. I think probably most, like me decided they wanted something to show for their 25 quid as there was no goody bag either, just the water and chocolate mentioned earlier. I personally would recommend the race though if it falls into your plan next year or as a target half marathon. The price is probably the going rate for a half marathon, the course on a good day is ideal for a fast time and with an early start and an easy route from Sheffield it doesn’t take up too much of your day. There were a few things they could improve on but I think it’s important to remember these are still difficult times particularly for managing a large number of people so all in all it’s a yes from me.

Paul Middlemas who knocked around 3 minutes off his PB and looks in great shape ahead of the London Marathon and Frances Roberts who stormed home under 85 mins for a new PB too. 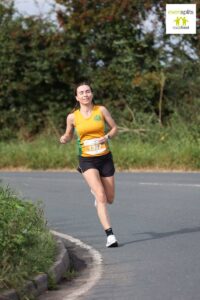