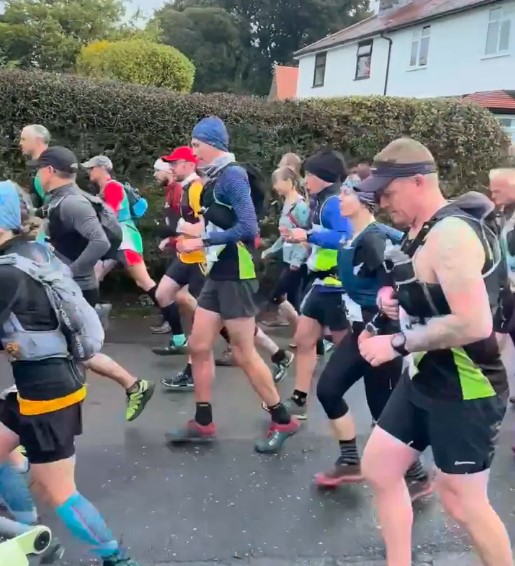 Any other time, this would be a report of a frustrating and rubbish performance. Nine minutes slower than my previous time, and in better conditions. However, I’m going to cut myself some slack. 18 days after a positive COVID-19 test and already this was my second race, which makes me both very lucky and very grateful to vaccine science. The day before I’d been supposed to be either a reserve for the fell relays or doing the Hathersage Hurtle, but the relay team (luckily for the club) had a better option and there was no way I was doing 20 miles. Come Sunday morning though my fell shoes were complaining loudly about being stuck indoors, and the fidgets got the better of me.

Windgather is a BL category race, taking in a big anticlockwise loop around and above the Goyt Valley between Buxton and Whaley Bridge. We’d been warned to bring full FRA kit, and when I parked up at Poole’s Cavern (decent toilets and somewhere to get a brew) the rain was starting to set in. However, it passed as quickly as it had arrived, and by the time I’d ascertained I was the only Strider (perhaps even the only Sheffield runner) the sun was pushing its nose through, and we set off up the gentle tarmac gradient that takes in the first kilometre or so.

The first five miles is about as easy as fell running gets. A middling ascent, then mostly downhill with a couple of steep banks but nothing too tough. I found a rhythm and kept pace with the runners around me. Not long after passing the bottom of the two dams in the valley, the course takes a sudden left turn, and kicks up sharply. Last time I ran this, there were fallen trees and all sorts but today the conditions were good. I did do some walking on an early steep climb, but then so did everyone else. Once we were out on the ridge that climbs from Windgather Rocks to Shining Tor I settled again as the clouds closed us into little pockets of isolated humanity.

That was the end of my good form though, and the course decided to prove to me that I’m not fully recovered. The descent back into the Goyt Valley is a stinker. It’s either a path or a stream bed (your guess is as good as mine) and on tired legs it was enough to finish me off. The climb back up the other side should be just about runnable, but I just ate all my emergency food and walked up it, knowing I didn’t have much left in my legs. The last 2km is an easy downhill/flat on farm track and pasture, but it was one of the toughest mile-and-a-bits I’ve run (I was running, but slowly enough that a couple of people checked I was OK).

The relief as I crossed the line was tempered only by the fact I’d half a mile to walk to the car, and I decided to miss the post-race catering because the prospect of untying my shoelaces to go indoors was too much to contemplate.

This was a really stupid idea, I wasn’t ready for it and my body is exhausted as I write this on Monday. However, psychologically I really really needed it, because I have inadvertently become one of those running people.

Although it was a busy weekend for racing it’s a pity more Striders weren’t at this one, I’d recommend it. Lovely atmosphere, hard work and smashing scenery.