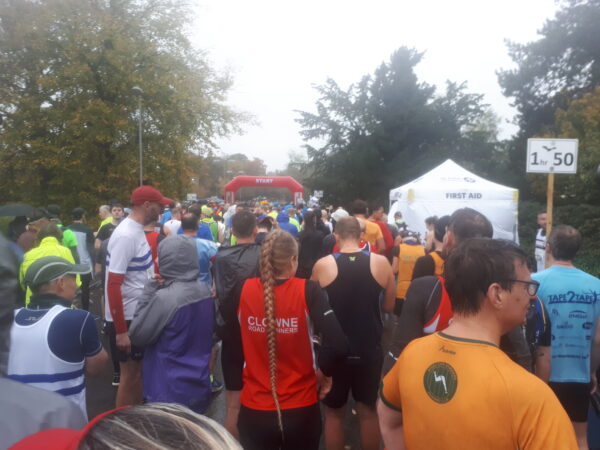 For the record this is my first time at this race, and if you want a potted summary, well here you go: “very wet”.

Well, I set off from Sheffield with Mark Warriner (a fellow Strider) heading for Nottinghamshire in a fairly constant downfall of rain (as my introduction has suggested this may be a recurrent feature in this report). Traffic was not so bad and it was easy to find a parking space in Worksop (which can only be a good thing). Once parked up we headed on foot to the college campus that was hosting the start and end of the race.

Many like-minded Striders also made their way to the college, complete with the race numbers required for the race. At the college we were informed that the only inside space was reserved for volunteers (and bearing in mind what was to follow I do not begrudge them that). Us racers waited outside making full use of any cover against the wind and rain provided by the college building.

The organisers took pity on us poor bedraggled runners outside and we were ushered inside, but due to the water being turned-off (oh the irony, due to the blatant profusion of the wet stuff outside) the toilets were not in use (there were the usual portaloos available of course).

The original plan for a group Striders team photo was reassessed and the various groups were snapped in-situ, not quite the same, but needs must.

At the allotted time we were shepherded out of the building and back into the wind and rain (although admittedly the wind had abated a bit) to the start line, because after-all, we were there for a reason.
Spirits were high (despite the weather) and many club runners (and many who weren’t) gathered in preparation, some in fancy dress (bearing in mind the Halloween theme), but also some with creative re-purposing of bin-bags and other waterproof materials.

The race started and off we went.

The path headed south, and was undulating. The issue I have with going up hills was one thing (they weren’t too steep anyway), but many down-hill sections (normally good) eventually ended with an uphill section, this boundary marks a point where the considerable rainfall collected to form considerable puddles, many of which could be avoided with some deft foot-work.

The race is predominantly rural, most of it using the National Trust Clumber Park grounds, so there were plenty of tree-lined avenues on mostly decent paths but with a relatively short section over well-pummelled grass. I had been tipped the wink and so I was kitted out in trail shoes.

The homeward leg was altogether different, with prolonged dips in the course, where the prolonged rain chose to linger. These resulted in long sections where the word “puddle” doesn’t quite do them justice, these stretches of standing water were essentially ford-like and any attempt at avoidance was futile, “embrace the wet” was the only way to get through them.

It was seemingly unrelenting, once you had squeezed out the last of the squelch from your trainers (by the natural process of pounding the road) then it was back to square one, with a seemingly longer patch of deeper water to be traversed. This was repeated a few times (because obviously, once is not enough).

A half marathon has a beginning, a middle and an end, and when the route returned to another Worksop College Campus the sky was blue and it had stopped raining, and the finish line wasn’t that far away.
I crossed the finish line in just under 2 hours (which I was happy with considering the conditions).

If asked my opinion of the event, I would point out that my single outing was in the face of some extreme weather and course conditions, but it was well marshalled (even though the marshals themselves just had to stick around and bear the elements, all credit to them). The course was varied and justifies the description provided by the organisers, as being “scenic”.

Would I do it again? Yes, but I would cross my fingers more firmly next time in the hope of good weather. I might even do it again in the rain.