There is currently a, sometimes heated, debate in running at the moment about the morals of wearing carbon shoes which are becoming widely available. No such qualms in the world of triathlon however where it seems that the sky is the limit in terms of how much you are prepared to invest in your equipment to achieve an edge; £200 for shoes appears to be a drop in the ocean when an entry level time trial bike can cost £2000 and spending £10000 on your bike is not unknown.

So, when Abbie Pearse arrived at Croft Motor Racing Circuit with her trusted road bike for her first ever duathlon, “not even any tri-bars” she exclaimed, she felt a little under-dressed. However, as we know, you can have the best gear in the world but it’s useless if you haven’t got the engine to drive it.

The event comprised of a 10k run (37:35) , 40km cycle (1:12:14, which is over 20mph for nearly 25 miles in English), followed by a 5km run (19:51). Total time 2:12:58 which doesn’t add up as there was a further 3:18 burned in the transition; taking off your running shoes, putting your cycling shoes on and getting on your bike then doing the same but in reverse for the 5k run. The fastest women can get through transition in nearly half that time so something to work on if Abbie were ever to take the event seriously. Even so, she finished 7th female overall and second in her category (FE 25-29 as triathlon goes up in five year age groups) and 114 overall. Strider John Nicholson did 48:28, 1:22:12, 28:24 to finish with a gross time of 2:42:28, sixth in his MM (65-69) category and 299 overall. The event was Triathlon England National Championships and John has qualified for the European Champs. Abbie hadn’t completed the right paperwork for this but “be careful what you wish for” might be sound advice. 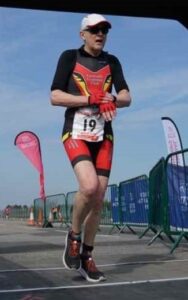 Both of Abbie’s runs were the second fastest overall whilst her bike was nineteenth. Bob Pringle once said to me that you can’t afford a weak event in triathlon but then, Abbie was wearing Nike Alphafly Next% the prototype of which was worn by Eliud Kipchoge when he broke the two-hour marathon barrier.

Full results Yorkshire Duathlon 2021  You might also want to look up Rachel Brown who is not just a winner on the bike. In her book “The Butterfly Within: A Triathlete’s Race Against A Brain Tumour” she describes her life from the moment she was diagnosed to the day when she proudly returned to racing for Team GB.