This was my second running of the race, and the first marathon that I have run twice, befitting the fact that it is what I consider to be my “local” marathon.

As I was driving to the event (and had spare seats) I opened it up to fellow Striders on the “Car Share” group, Kevin Wong said he was keen on going, however he was doing the “10 Mile” race. I warned him that not only was I doing the marathon, but I am not particularly fast, but this didn’t appear to be a problem as far he was concerned.

We set off from Sheffield in the early hours heading north, my plan was to get to the Elvington “Park and Run” car park before the queues for the airfield site became snarled up with the weight of traffic (for the previous race it took a whole hour of queuing-up at the airfield).

I must admit I slightly overdid it and arrived well before the hordes (and virtually anyone else), the man in a day-glow jacket on the gate gave directions and we headed off to the parking spaces, navigating the car round an almost entirely unlit airfield (before dawn), looking for a “flashing light” (an experience in itself).

We parked up, and after a wait, we set off on the bus to the York University campus which hosted the start and finish of both our races.

Predictably we arrived some time before our races, so we explored the campus, and had a nice leisurely stroll taking in both the start and finish lines, we had plenty of time, so even getting lost on the campus (which is all too easily done) didn’t present a problem.

As the allotted time came near, I stripped-down to race kit, handed my bag over to the Baggage Store, and we headed to the start line. At this part it started to rain. I wished Kevin “good luck” in his race (he was due to set-off after the marathon runners had cleared the start) and joined the marathon runners in the start pen. I found the reassurance of John Atkinson-Croad, another Strider (suitably clad in green and gold) just before the warm-up.

After the countdown, we were off, and I was left in John’s slipstream, and he disappeared into the distance. The route headed north into the city centre, past the Minster, over the cobbles, and through the throng of supporters, the route then headed east through suburbia (where the drizzle abated) and past the right turn (at about 5 miles, which is where the routes for the marathon and 10 mile race diverge) which the race marshals were trying to tell us didn’t exist anyway.

The route then snaked through rural North Yorkshire, past the half way point.

The second half of the marathon is characterised by two “out-and-back” sections (which I must admit to not being particularly keen on). Running down a road, just to be sent back in the direction you came, but on the other side of the road, doesn’t provide the most fulfilling running (in my opinion). To be fair to the race organisers the first of these u-turns was a “spectator” site in Stamford Bridge, so there was plenty of encouragement. The second was seemingly never-ending, but the crowd support made it easier.

At this point, I must admit I was fading, and rueing my lack of long runs in preparation, but this came as no surprise (because that was my fate in previous marathons).

The route was also used by ambulances ferrying casualties to hospital (it happens some times), but fortunately there weren’t too many (and I wish them well in their convalescence). Unfortunately the effects of the marathon on the runner meant that asking runners to move to one side of a narrow road was problematic and impeded the progress of the vehicles (even with the blue lights and sirens going).

The route returns to suburbia and back to the university, and (importantly) the finish line.

I crossed it just under 5 hours after being sent off (not very good I know, but my previous attempt at a marathon after the lockdown, was even worse).

I met-up with Strider Kevin (who had wrapped-up his race some time previously, and deserves my apologies) and we headed back to the Steel City.

Good? Yes, I should say so, but with it being a marathon, probably better looking back than how it appeared at the time. 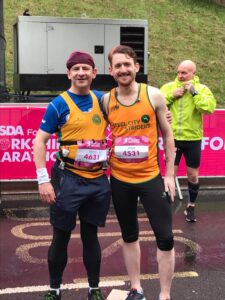 The marathon was won by Tom Charles (of no identified club) in 02:24:22 and Becky Penty (York Knavesmire Harr) in 02:47:43
Link to full marathon results here.
Striders marathon results: