This fantastic event is run by the Staffordshire Long Distance Walkers Association (LDWA) and takes in Staffordshire, Derbyshire and Cheshire if you do the 28 mile route. You can supplement this with a jaunt up the 506 m high Shutlingsloe – the Matterhorn of the peaks – to add another two miles.  Two Striders did the event (Nick Burns dropped out due to COVID).  As the saying goes, when the cat is away, the mice will play and Messrs Heller and Haake decided that run/walk/eat was the approach to take and taking in the shortest 21 mile route and making our event the Two Shires (excluding Cheshire).

The scenery is wonderful, taking in Gun Hill (used in the Tour of Britain cycle race), the Roaches (an impressive gritstone ridge), Lud’s Church (a thin gorge you literally drop into), and Wildboarclough (pronounced ‘Wilbercluff’) where you are greeted with Staffordshire Oatcakes, one of the best inventions ever (pancake in size, covered liberally with cheese, rolled up and microwaved).  The Striders team ruined their remote chances of a top-three spot by spending far too long drinking tea and eating Nick Burns’ share.

Replete, the return from Wildbourclough was relatively gently with just a couple of hundred of metres of ascent/descent and the sight of Wincle Brewery telling us we were close to home.   We sped up towards the end, competitiveness finally kicking in after four and three quarter hours when we realised we might miss 6 hours for our 35 km / 1,097m elevation jaunt.  On arrival we were asked what time we started and the approximation of “about ten to nine” was taken literally and gave us an official 5 hrs 58 minutes finish (unofficial Strava time 5 hrs 56).

We then tucked into a set of gourmet salads that would grace a wedding, followed by apple pie and custard.  Dutifully, we ate Nick’s.

A great day out and great value at £15 for non-LDWA members (£7 for members) – worth it for the oatcakes alone!

LDWA do not release results for this event 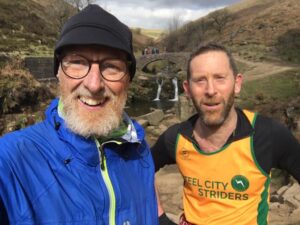