The Wadsworth Trog is a category BL fell race up on the moors above Hebden Bridge.  It is affectionately known as ‘The Beast’, and this year was running for the 30th time.

I’d had my eye on this race for a while as my Grandpa, whose compass I still use today, was Jack Wadsworth, so I wanted to run it for him.

The weather was not to disappoint.  After a relatively dry and warm spell, the rain picked up during the week and then the storm came.  The day was to be cold, wet, and very windy – perfect for running across exposed moorland!

Alison and I arrived after a relatively painless journey and headed to the cricket pavilion to register.  We passed through a relatively light-touch kit check, and collected our numbers and dibbers.  We then went back to the car to study the route – it’s a partially flagged course requiring navigational skills, and neither of us knew the area.

We decided to ask a few of the locals what the tricky nav points to look out for were, and received some great advice ‘if you’re going to go wrong, it’ll be here’, and he went on to explain.  We both listened intently.  In the background, Alison overheard a girl muttering ‘every time I do this bloody race, I hate it!’.

5 mins before the start at 10am we headed outside into the cold.  It was so windy we couldn’t hear anything the RD was saying.  Then one false start and we were finally off and up to the first of thirteen checkpoints.

The weather was grim.  All but 4 of the checkpoints were manned and there were three photographers out there.  All credit to them standing cheerfully in that weather!

There was a proper descent and ascent into and out of CP2, with some runners descending on their bums, and then a long line of fell runners going up into the clouds on the ascent.  Up on the top, there was a hideous trudge across flattish but ever-so-slightly-and-enough-to-really-know-about-it uphill.  There was a headwind, and it was boggy, thick grassland.  I lost Alison at this point, as I opted to conserve energy and power-walk through the bog.

I caught up with Alison again at 7.5 miles and I decided to tuck in behind her (without letting her know).  To explain, I met Alison in October 2019 at the Go Big Moor fell race and I’ve been trying to beat her ever since – and she knows it!  Maybe today would be my day – but it was too early to know.  I followed her for about 1.5 miles and she finally spotted me after kindly holding a gate open!

It wasn’t long before she pulled away from me again, as we reached a long ascent up some tarmac, where she kept jogging and I had to walk.

Navigation wasn’t really an issue, there was always a long line of people to follow and I didn’t need to check my map.

After CP7, there was another awful section along stone flags which were so wet and slippery.  The headwind was so strong at this point and it really did feel like I was on a backwards conveyor belt, my shoes having no traction at all on the wet stone.

I dug in, and climbed over several tall 5 bar gates following everyone else, unable to engage in any race banter with others due to the conditions being so bad.  I always had Alison in my sights.

At CP9, after a short, steep climb, Alison was tying her shoelace.  There was a long descent to follow so I took the opportunity and ran!

I pressed and just kept going, I daren’t look behind.

Suddenly the line of people I was following all dispersed in different directions.  Damn, I thought, the last thing I need is to get lost now.  I asked a couple of guys if they knew the route.  They didn’t.  Then, I looked to my left and I saw the landmark that the local giving nav advice had told us to look out for!  I pointed it out to the guys, and headed down a pathless tussocky hill towards the chimney shaft.

There weren’t many people now.  I had Alison chasing me  but I didn’t know how close she was.  There were two people disappearing past the chimney, I didn’t know the route, I was knackered, and the clag was coming down.  I couldn’t lose those people as I didn’t have time to check the map, so I dug in.

It was now foggy, with driving drizzle.  I did spare a thought for Alison at this point, who must’ve been really struggling to see anything in her glasses!  Unbeknown to me then, Alison had earlier taken a really nasty fall, ripped her leggings on both knees, and sustained some impressive looking cuts and lumps!

Before long we arrived at CP12, with only one more to go, which I knew would signify the last steep climb back into the village and up to the cricket club.  I dared to look behind me, she was not in sight.

I did my best power walk through the steep fields, no clue where the finish was.  Then, I turned right and saw it!  The cricket pavilion!  Expecting a final 10m victory sprint, I was instead directed to do a lap of the cricket pitch before the final dib.  What is it about fell races and laps of the pitch?! WHY?!

Anyway, I gave it my all, though it wasn’t much of a sprint.   I’d finally beaten Alison.  I’d made my Grandpa Wadsworth proud, and I got a nice commemorative mug filled with hot soup to celebrate.

Alison and I are still talking.  She didn’t make me walk home.  But I have a feeling that next time, I won’t catch her! 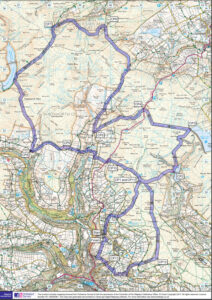