On a day that saw lots of Striders competing in either the St Valentine’s 30km race in Stamford or the Run Your Heart Out Valentines 10km race in Scunthorpe I popped over the Pennines to Liverpool for a race/football match combo. In the morning I competed in the Aintree half marathon and in the afternoon went to Burnley to see the home team lose 1-0 (to Liverpool coincidently). 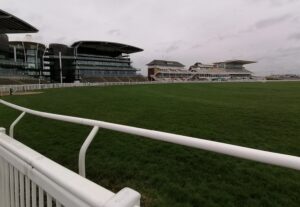 Backdrop to the race

The Aintree Running Festival, which included a 10km and 5km race as well as the half marathon, was held completely within the grounds of the famous old racecourse. The 5km loop was on the tarmac paths that run alongside the Grand National horse race circuit and was almost flat. It was one lap for the 5km runners, two laps for the 10km runners and for the half marathon it was 4 and a bit laps! With the shorter races starting some 45 minutes after the half marathon had got underway it meant that on laps three and four I was both passing and being passed by other runners right until the ‘final furlong’. 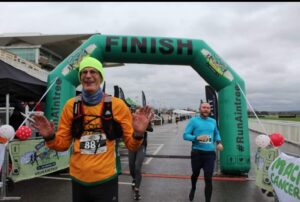 The races were held under very trying conditions; a very cold and gale force wind throughout meant that few people would have run a p.b. I was happy with my time and I finished first in my age category. Luke Mason won the half marathon race in 1:12:24, Laura Gray was first female in a time of 1:19:18. There were 297 runners in the race. Striders results were as follows:

There were no Striders in the 10km or 5km race.

The link to the full results here.