So, Sunday morning and off to Ashbourne, Derbyshire for a 9.30am race start, myself feeling somewhat inspired by Nick Burns achievements the previous day in completing the Bob Graham Round. Certain proof that if as a runner you set your mind to something, then you can achieve.

I’d never visited Ashbourne before and as I enjoyed the drive out through the Peak District, the weather conditions were looking favourable for running as I focussed the mind on what would be a new half marathon route to me aside numerous Sheffield Half Marathon runs at this distance.

Striders gathered at Ashbourne Recreation Ground and I chatted briefly with Richard Pegg (who had been part of Nick’s support team the day before), Richard had set off at 4.30am that morning to get to Ashbourne and race, we’re all Striders aren’t we!

Runners then made their way to the start line by taking a short walk into the town centre. I took the opportunity to gather some intelligence on course layout, chatting at the start line to a local club runner. “Oh, there’s a couple of hills, a big ‘un in particular, it’s like that!” as this guy pointed his hand upwards at the angle of a church steeple. Thing is when you’re from Sheffield and you run around Sheffield, you tend to think “yeh right mate, you’re just exaggerating there”, well Russ, your assumptions were soon to be proved wrong.

Without further ado, the lady on the Norman Collier faulty microphone style pre-race safety announcement assured us “what goes up, must come down” and we were counted down from 3-2-1 and off on our way, taking in a loop of Ashbourne town centre before passing the starting point again and out into the sticks towards Mapleton.

I kept the 1 hour 30-minute pacer in sight for about the first 4 miles or so but he gradually vanished down the country lanes ahead. There were a few Striders ahead of me at this point, already setting a good pace for themselves.

Runners passed through the village of Thorpe and sure thing Blore Hill (235 metres ascent) made its presence known in the distance, it was a pace killer and I ran about 50 metres of it before walking the majority of the ascent. Some hardy individuals did appear to manage a trot like run up to the top as the road sort of levelled out but boy was it steep. The water stations had been designated “cup less” which caught me out as there was an expectation runners would carry their own water vessels (I didn’t) to refill using the jugs of water provided, after that hill a whole water jug went over the head to bring me to my senses, sorry it was necessary. Handful of jelly babies and onwards.

Onto Ilam, with the course turning south east and heading back in the general direction of Ashbourne. The route took a brief out and back over about 1.5 kms through Okeover Park, giving you chance at the turnaround to see who was behind you as you ran back the way you’d just come. At this point, I chatted briefly to my Rumbelows Division 2 competitor, Robert Hoffman before getting a sniff for the final push towards the finish as the 10-mile sign made its appearance.

Throughout the race and as I tried to keep my concentration on a decent finish time, I couldn’t help but notice the numerous and very appealing looking country kitchen type pubs along the route, a sure reason for another visit to this part of the world.

The route made another pass back through Mapleton on the approach to Ashbourne. Runners were marshalled sharp left and off country road into a cafe car park, (eh, seems odd me thinks) before being told to “keep right around that bush” with The Ashbourne Railway tunnel opening up before your eyes. Exit t’other side after a couple of hundred metres of dimly-lit tunnel and into the outskirts of Ashbourne town centre. I picked up the pace with as close a sprint finish that could be mustered towards the finish line back at the Recreation Ground.

A friendly and well marshalled event held by Ashbourne Running Club and with a nice race medal to show for your exertions and a helping of bananas and Jaffa Cakes at the finish line. Definitely worth another crack in the future.

And the memory of the event that sticks in my mind? Well, it’s of the guy on the mountain bike who followed runners around the route. He passed me about 4 times providing words of encouragement whilst carrying his rather charming dog perched contently half in and half out of his rucksack. This dog looked like it didn’t have a care in the world, bless, as it watched the world go by. It was nice to meet the dog and owner at the finish line and show my appreciation to the pleasant pooch for making me smile periodically through the 13.1 miles.

A reasonable turnout of Striders for this event with a credible 8th place finish by Seth Kirby. 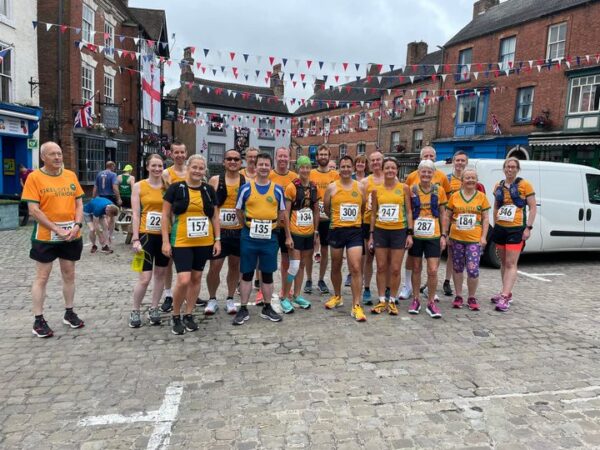 Full results can be found on the sporthive website.