Sunday 20th March saw the long-awaited return of the Ashby 20 (miles) road race down in Leicestershire. After being cancelled twice due to Covid, this was actually the postponed 30th Anniversary edition, and the atmosphere certainly felt celebratory. This race has been on my wish-list for a while as I grew up in Ashby and still have strong connections to the town. Plus I really wanted an Ashby 20 hoodie…and there’s only one way to get one of those!!

We often throw around the phrase “perfect running conditions” but they were! It was a beautiful, crisp, sunny Spring morning and there was a feeling of real excitement at the start line. We gathered in pens according to predicted time and were then led in a group to the starting area. After a few minutes of nervous chatter with those around us the klaxon went and we were off, out of Ashby and towards the village of Packington.

I’m always highly suspicious of races which are described as ‘undulating’ as it seems to be a catch-all for any kind of elevation. This really was the definition of it though – a constant up/down for most of the race. Fortunately, living in Sheffield gives you a certain amount of hill-readiness and this did come in useful on a couple of the longer uphill sections.

The key piece of advice given out before the race is that standard one that we all ignore time and time again: Don’t. Go. Off. Too. Fast! However, the first couple of miles are all down-hill and so it genuinely is difficult not to get carried away in the moment and find yourself flying along, forgetting what still lies ahead. Once the initial excitement subsides, you find yourself on the first of two identical loops of approximately 8.5 miles – these make up the bulk of the race. A tour of the country lanes through some of Ashby’s very pretty surrounding villages before finally turning off and back up the hill towards Ashby, back into the park and on towards the finish line.

After failing to adhere to the pre-race advice and going off far too fast, the last couple of miles were a real battle and I was grateful that the uphill wasn’t anything like the gradient we might face in Sheffield. However, the wonderful marshals kept everyone going with their cheerful encouragement, and I benefited from some healthy competition with a couple of other runners who I’d been neck and neck with for most of the race. I crossed the line in 2:36:59 and was absolutely delighted, even more so when I received my lovely sustainable goodie bag filled with the traditional cheese and tomato cob, a special Anniversary medal and, of course, the hoodie. 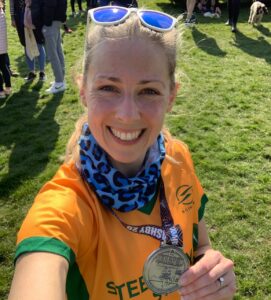 From start to (almost!) finish, this race was a real treat. Very well-organised with lots of marshals and support on the route, plenty of water stations, a great goodie bag and a very friendly and inclusive atmosphere. It is also well-timed as a warm-up race for anyone doing an April/May marathon (which most of the people I spoke to seemed to be!). To top it all off, my parents were there at the end to pick me up and feed me, just as they used to when I lived there 25 years ago.