This race took place on a beautiful cool early spring morning in South West London. It consisted of 8.75 pancake flat laps around Battersea Park. (Has anyone ever completed a half marathon that has had more laps?). Coupled with a 4.5 mile warm up and a 2.5 mile warm down I turned the race into a 20 mile ‘half marathon sandwich run’, perfect preparation three weeks out from the Manchester marathon. It was also part of a race/football match combo weekend: In the morning I did the race and in the afternoon I went to see Brentford v Burnley (2-0).

I finished 215th out 544 runners and 1st MV65 in a time of 1:42:28. Given that there were only two male and no female runners over 65 in the race I could well have been the oldest in the race! Nice to think that nearly two thirds of the field were behind me. In fact I lapped a good number of the backmarkers twice, however the leaders in the pack did lap me. James Hoad (Thames Hare and Hound RC) came roaring past me on the way to a blistering winning time of 1:08:52 and the first female, Annie Birch (London City AC), wasn’t far behind finishing with a time of 1:17:46. It would be interesting to see how these runners would perform on the less than pancake flat Sheffield half marathon course – or better still in the Eyam half marathon!

Striders results were as follows:

The link to the full results is here. 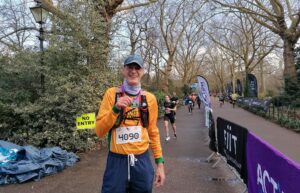