Brighton Marathon was not on my race plan this year until I found out that my son was running it.  I wanted to support him and decided I would be better at running than spectating (there is no way I would be running with him but I could be with him to collect our bibs, get to the start etc).

I ran this race in 2017 when it was really hot – a temperature of 21C was higher than they expected and there were lots of issues for runners regarding overheating and lack of water as runners were using the water to cool down. (Said the email that came a few days after the race reported.)   I had never seen so many runners experiencing difficulties before. They were super prepared for a hot day this year – I’ve not seen so many water stations and St John’s Ambulance crews.  (Sadly I did see some runners in difficulty around the 22 mile mark and at least one ambulance was in action.)

For my son and myself it was a great day, perfect weather, we both did it!

Some highs and lows –
Highs

Lows – to be honest it depends on your point of view!

I ran Manchester Marathon the week before so Brighton was always about getting round.  It was about being with my son.  It was my 6th race in 6 weeks – starting with Norton 9.   It was my slowest marathon in a time of 4:23:44 but that still bagged me first FV65 so I am happy!

I was fortunate to be able to stay with my son so did not need to book accommodation.  I stayed for a few days and by the time I drove home I felt fully recovered!  Nothing like running around with a 6 year old to keep your legs moving post run and for ice cream opportunities!

The race was won by Alix Ramsier in 2:29:07 and first woman was Melissah Gibson in 2:51:06.  There were over 8000 finishers. Great efforts from other Striders -Jeni and Alasdair coming in sub 3:45 and Philip sub 4 hours. Looks like some perfect pacing!  Sadly Robert Hoffman didn’t finish but got to 30k in 2:29. 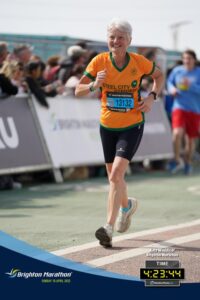