Saxons Vikings and Normans put on flexible, no pressure races in a variety of locations. Based in Kent they occasionally head “oop north” and run events on the Trans Pennine Trail HQ’d at St John’s Community Centre in Penistone. At the Yorkshire event competitors run a 6.55 mile “loop” (out and back in this case) as few or as many times as they want, just as long as they set out on their final loop before 6 hours after the start time. Any runner completing 26.2 miles laps will have completed an official marathon (by 100 Marathon Club standards), over 27 miles or more will have completed an ultra. As long as you finish one lap then you’ll receive an official finish time, medal and goody bag. Over this weekend, finishers ran distances from 6.55 miles up to 39.3 miles (so one lap up to 6 laps).

This format makes it great for people returning from injury or Covid etc, or indeed those wanting to see what they’re capable of, without having to commit to a distance in advance.

Three members of Hillsborough parkrun’s core team, who are also SCS members, opted to take part in the Cakeathon on the Saturday afternoon, along with several other Striders and friends. John Liddle, Event Director and community hero made a rare race appearance, accompanied by me, his trusty sidekick (for some reason I can’t get an image of Dangermouse and Penfold out of my head) and completed three laps (so 19.65 miles), and Peter Brash returning from injury (well, still injured to be honest) and with the added challenge of long Covid did one lap. Other Striders included Tony Lyell, along with Sarah, who did the half marathon distance, and Rose Royles who on the Saturday did the 6.55 miles. There was at least one more Strider, Ruth, I think (I’ve looked in the results and typically there were three Ruths so apologies for not knowing your surname! Ed: now identified as Ruth Tucker). There may have been more SCS participants, but it being a fairly relaxed affair not everyone wore club colours. 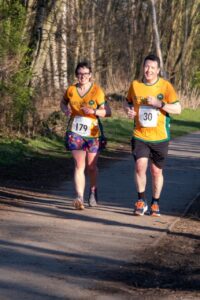 In terms of the event itself, whilst the route was relatively uninspiring once you’d run the course for the first time the atmosphere was lovely, the competitors and organisers really encouraging, and the aid station, primarily comprised of cake was world-beating! Alongside the race there was a cake competition, and I am proud to announce that my lemon sponge cake, which looked frankly appalling, tasted delicious and I received a “highly commended” trophy, which was possibly the highlight of my day, if not my life.

A couple of points to note from the experience John and I had – there were horses (John likes horses; I’m quite wary of them) so he did have to coax me past a couple of MASSIVE and TERRIFYING steeds at one point which clearly slowed our time considerably, as did the appearance John’s wife Jackie at the end of the second lap so we took an extended fuel stop to peruse the cake display. Also, John asked me to point out that I was 5 seconds faster than him as he had to leg it to the car for Lucozade to prevent a dramatic collapse at the end, whilst I got clipped in first before falling over.

Caroline and John with medals!

Overall, the race (or “community eating event” as one of our party described it at one stage) was a great experience, John ran his longest ever distance by three miles (all whilst dealing with me swearing/ dripping snot/ threatening to cry or throw a tantrum) and as all finishers we got the most fabulous and ginormous medal! 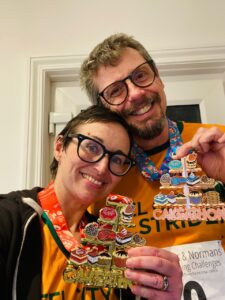 Caroline and Peter with those ginormous medals

The following day, Sunday morning, some people did it all over again at the Zodiac Challenge, with Rose doing the double, this time completing a half marathon.

Results for Striders are below (apologies to anyone I’ve missed):