This is my second time running the Cat Lane Canter after being introduced to the delights of the Gleadless Valley at the inaugural edition back in 2019. Although the Round Sheffield Run cuts through Lees Hall, both the valley and woods (Leeshall and Carr), are not areas that I am particularly familiar with. I do genuinely look forward to exploring new places locally – or at least trying to remember where I ran last time! The race also acts as a worthwhile fundraising initiative for Newfield School helped by local friends groups, Friends of Meersbrook Bank, Friends of Newfield and Carfield.

Cat Lane Canter is made up very simply of two race lengths, a short and long course. The short course is 5k and the long course is 10k or two 5k loops. Both courses start and finish in the same place on the main field. However, the 2022 finish is different to the finish position in 2019, as rather than running back up the steps onto the tarmac path beyond the school doors like we did in the past, this time we finished back on the playing field.

As is usual I missed the pre-race photo, opting instead to find the long drag back up to the finish area and attempt to warm up. During this time my legs were feeling a bit stiff (well that was going to be my excuse anyway!) Once I started to lose my bearings I retraced my steps back up to the start with everyone now gathered by the tents. Then we had a group warm-up delivered by a local PT, which I duly ignored and made conversation at the back in a childish manner.

We then lined up and prepared for the race director to send us on our way. I picked my spot behind a few Green and Gold vests and then thrashed out in my head my race plan for a couple of seconds. My plan consisted of not going off too fast and trying to stick behind fellow Strider Paul for as long as possible. Both aims were in absolute tatters much like my breathing was by the time I left the large loop of the grass field…

For much of the first lap, there were four of us spaced out across 50m or so. I honestly forgot how much downhill and the various tight turns there were in the first 2kms. However, in comparison to the last time the race was held, conditions were dry and on pretty solid ground so relatively uneventful. I had the best vantage spot to see the lead change hands between the frontrunners. There was a tussle back and forth between Paul and the leading runner at the time. Throughout the first 5k loop many of the marshals out on route continued to shout words of wisdom in my general direction at different points. I remember one marshal saying the runners in front are ‘looking tired’, and by that stage, I was already feeling worse for wear – but I hoped others around me would be tiring too!

We passed by the first 5k after the two seemingly endless climbs. On the downhill of the second loop another clubmate, Stephen, came flying past right on queue (he always starts slower than the rest and then motors past us!) and offered up some encouragement, which was greatly appreciated – even if I couldn’t respond properly! Paul and Stephen were now slogging it out ahead and the guy who had been leading for the majority of the race started to lose ground. I was slowly closing on him. A few minutes later I latched onto the back of him for the next 1k or so, and managed to regain my breath a little. We then went through an open field between the two woods for the second time and just as we entered Carr Wood again we were now side by side. He looked across and remarked ‘well done, go past’ and I said I was saving my energy for the two final climbs and he replied ‘****, I had forgotten about that!’

I gradually started to move away from him and then headed for the first climb over another gravel like path. Towards the end of the second loop, there were a couple of somewhat memorable flashbacks that distracted my attention away from my heavy breathing on the hills, if only for a brief moment! Firstly, whilst in Carr Wood I glanced over at a load of very plush houses that backed onto Cat Lane to my right and overlooked the stream. At this stage, I heard shouts of ‘go Strider’ from one household cheering from their back garden. There was a guy just in front jovially having a conversation with these people outside and restating ‘I’ve nearly finished’. After this point, I nearly went down the wrong track but the same person and the runner behind told me to carry on until we reached the path next to the stream.

A little while later I saw Stephen bound off the top path about 100m metres ahead of me and back onto the trail we were meant to be on. I did wonder where he had gone as I could only see Paul for a short period! As we approached the final part of the climb there were more runners visible completing their first 5k. Other runners around me kept me going until the terrain flattened out, as well as seeing the familiar face of Dave Birch enthusiastically showing his support too. He always pops up at the most timely points! For the remainder of the course, I knew there was a small uphill before we arrived at the grass pitch. Now on the main field, I could see Paul and Stephen still neck and neck, but just too far away in the distance. Again, a few others were offering their support and I just about managed a sprint to the finish area. However, the real struggle at the end was taking off the yellow wristband which the organisers used to scan your place at the finish line… Overall, a good tenner well spent and bags of fun! I will be back.

For the long course (10k), the race was won by our very own Stephen Schubeler in 40:29, closely followed by fellow Strider Paul Middlemas. First ladies were Strider sensations Gillian Allen (46:48) and Laura Mella, coming in second place.

There was a near Strider clean sweep on the podium for both male and female senior categories on the long course, with Nicola Birch, former Strider now at Hallamshire Harriers, taking 3rd FSen spot – with another great run! Since the results were released it is worth highlighting all the other age category prizes not recognised at the time of the race. Sarah Allcard came 1st F40 and Nada Ross was 3rd F50. Alongside this, Neil Schofield and Al Cook were 2nd and 3rd M50 and Kevin Haighton finished 3rd M60, respectively – so fantastic runs all round! 66 runners completed the short course and 116 finished the 10k event. 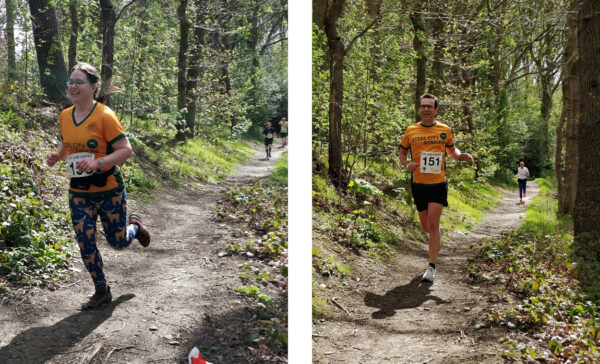 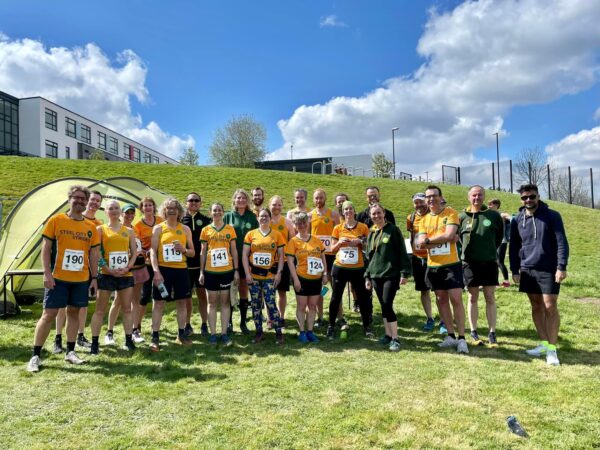