I first found this run advertised several months ago – while looking for an ‘easy ultra’. I happened to mention this to a fellow strider as it was a new race who promptly booked herself and her husband onto this and continued to encourage me to do the same. Another Strider also booked herself onto this. (Us Tuesday Millhouses Strider Group are becoming mad!)

Essentially this ultra consists of completing 10 x 5k loops, giving it a total of 31 miles – with a rest in between as each loop started on the hour every hour. And if you felt you were unable to complete one lap you could always sit it out and join in the next lap. Sounds easy. However if you missed a lap you are not entitled to race the final lap…

The route is based in the North York Moors, and organised by Scarborough and Ryedale Mountain Rescue. (free overnight camping thrown in with the cost of the run) so having set up camp at Adderstone, registered awaited for the day to break.

Prior to the run the course itself hadn’t been disclosed, so this couldn’t be checked out. It was also revealed at the start of the race that the laps were to be alternated clockwise and anticlockwise.

The route itself was through woodland, across trails and paths and fields. Underfoot was precarious at times due to rocks, stones and tree roots. There was in addition several steep uphill bits which you might think great – can run down this, but was so unstable underfoot it was wise at times to walk both up and down. Unfortunately this did create some bottlenecks, especially as some of the paths were single file only. Definitely not a route for any sort of PB.

Discussing with my fellow striders some sort of strategy to get to the end of the day we decided to take it very steady throughout the day to ensure we managed to get into the final lap.

At the finish of each lap your race number was stamped to show completion and it was nice to chat to others who were also competing, and to fuel up, nip to the loo etc.

Having said this it did get progressively harder both physically and mentally. There was a risk that if you sat down you’d not want to get back up, muscles were trying to get into recovery mode, and at times you just wanted to ‘get it over and done with’ This was advertised as an endurance race, and it certainly was.

The winner of the 9th lap was given the right to choose which way the 10th and final lap was to be run. He chose what some of us thought was the most difficult way round and consequently won that.

Overall the day was good, its really a non competitive event, after all everyone has the same amount of time to complete a lap, the marshalls were very friendly, and there were quite a few spectators due to the camping element, to cheer you on. The weather though windy held out and only rained for about 20mins after the event. 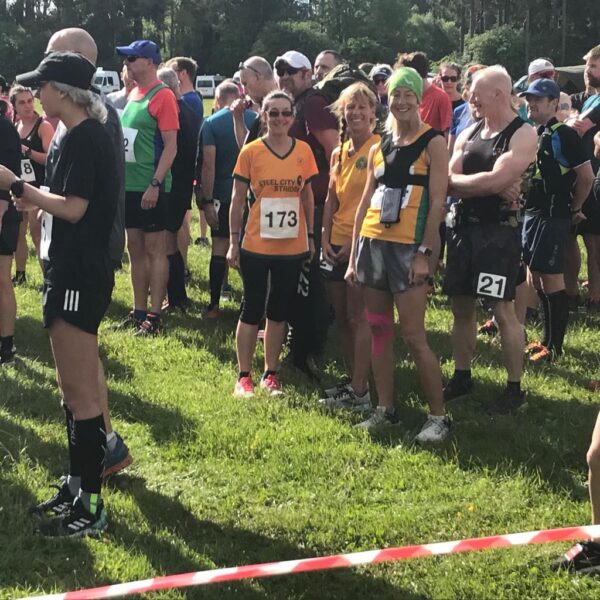 Our trio of Striders at Dalby’s Inferno

The winner of the race is the person who completes the final lap the fastest.
This was won by Ian Martin – Vale of York in 22.49mins
First female (came 3rd overall) Elizabeth Naim, Selby Striders in 23.44 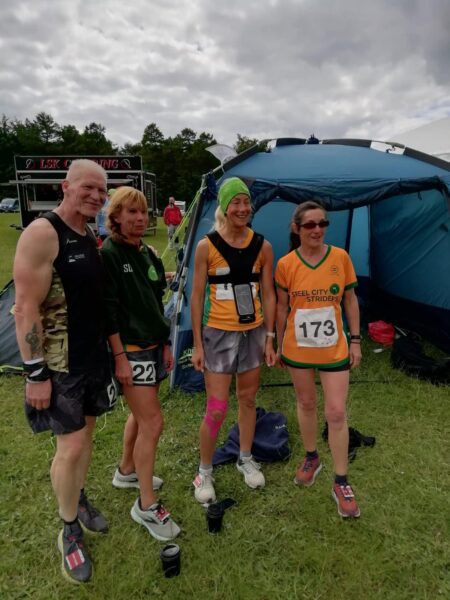 Striders at the bag drop