When my 18 year old daughter kept nagging me to enter a 10k with her, I initially thought she would go off the idea.  She’s only done one before, just before lockdown after finishing a Couch to 5k app course,  but she was persistent so we chose Derby which fell in her Uni Easter hols.  We had a night away at a cheap hotel and looked round Derby which was much nicer than I expected – lovely river, great cycle paths and impressive old buildings.

Race-Day – Most people were wearing the 20th Anniversary Teeshirt for the event so it was a sea of green.  Good facilities – proper toilets at the football stadium and no queue.  Good race village atmosphere, with goody bags from various stalls.

Once we on the start line I wasn’t sure how to pace it, as my daughter hadn’t run a 10k distance since  Dronfield in 2019.  Surprisingly there weren’t pacers and it made me really appreciate all our local pacers at races.  She was adamant that she was aiming for a sub 60 mins, so that’s the pace we started at.  I thought she might fade half way round.    There were a few ‘rises’ – hills weren’t hills but long angled bridges over bypasses and the route was on wide closed roads and generally flat.  Daughter was doing well, but a bit less well up the ‘rises’.   Everything was going really well until Kilometre 5ish when I tripped, parachute-rolled and fell flat.    Luckily I didn’t take anyone else out.  I hobbled to the side, swore a bit, and told daughter to carry on and I would catch her up.  I didn’t actually think I would catch her up as I was only just walking at that point.  But I thought it was best way to get her to carry on.    I plodded along for a few hundred metres, had a drink at drink stop and decided I better start running again.   I thought she’s not be too far ahead as I didn’t think she’d stick to the pace.  It took me to Kilometre 9 and a bit to catch her up.  We had just over 6 mins to do the last kilometre.   Could we do it ?  I had been putting max effort in to catch her and started to struggle.  With the finish in sight, and the seconds ticking, I told her to go for it.  She got 59:55 and I just missed sub 60 with 60:02.  Felt quite emotional – ( probably due to the shock of tripping).  And pretty proud of her – improving her PB by 13 minutes.    Oh to be young!    I think we might have to do it all again, except the falling over bit. 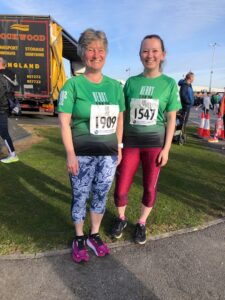 Meanwhile further up the field, for fellow Strider, Jonathan Bickley, the race went well at first. About two thirds of the way round he then caught his foot on a kerb, regained balance, but the foot steadily deteriorated and by the last mile he was running with a hobble. He still enjoyed it though and managed to take 48 seconds off his previous 10k PB.

Samuel Moakes (Sutton in Ashfield Harriers & AC) defended his 2021 title with a finish time of 31:07, and Lily Partridge, who passed the line in 34:24, set a new female Derby 10k course record.

2392 runners took part in the Derby 10k, including two Striders.