The Don Morrison Memorial Edale Skyline is an iconic fell race, first run in 1974. It’s 34km (21 miles) long with 1373m (4505ft) of ascent one of only a handfull of category AL races in the Peak District.

The route begins in Edale, and follows an anti-clockwise loop up to Kinder Scout, over to Brown Knoll and Mam tor, across to Lose Hill and Win Hill before looping back to Edale. As someone who normally enters runs organised by a school PTA, not the FRA, I was a little apprehensive about entering, but I’ve been trying to push myself recently and having completed two ‘BL’ category races already this year I thought it would be a good challenge.

It’s a winter race, and the race organisers give plenty of warning that conditions can be cold and hostile up on the hills at this time of year. There are strict requirements for full FRA kit plus extra winter layers, and hill navigation experience was a pre-requisite to entry. I was well prepared, having packed goretex over-mits, spare baselayers, survival bags and even my bright orange percy pud hat, but as it turned out it was one of those bright, clear spring days when you can see for miles and it feels like it’s almost time to pack away the hi-vis. As I drove to Edale it occurred to me that I was at more risk of sunburn than hypothermia so I pulled into the petrol station in Hathersage to buy a bottle of factor 20.

The race begins in a field above Edale. After a short sprint we climb up ‘The Nab’ to Ringing Roger, Its a slow steep walk and the field of runners is very close. Once we reach the top the field opens out. Conditions are dry and the ground is solid but technical.

After only 20 mins I pass a few fallen runners who have tripped on the path, but soon the ground flattens out and we turn to head along the gritstone flags of Brown Knoll. The flagstones are hard on the legs as my fell shoes don’t have any cushioning, so I try to run on the edges of the soft peat where possible, only hopping onto the stone to avoid deep mud. By now we’re 10k into the race, and I feel I’m doing alright, keeping to a steady pace with a pack of runners in single file. I’m directly behind a guy who falls on the path. As he falls he expertly side-rolls off, avoiding a pile-up. I check he’s ok before continuing on ahead of him. About 500m later and it’s my turn to fall ! I’m not as elegant as him and I fall straight forward, landing flat on my shoulder and face. A bit dazed I roll out of the way, my shoulder hurts like hell. My legs are fine so after a while I get up and keep moving and try to run it off. I turn east along Rushup Edge, nearing Mam Nick and as I approach the water station I’ve caught up with the group.

The path between Mam Tor and Loose Hill is busy with walkers enjoying the good weather, the terrain has changed from technical gritstone to soft sandstone, much easier on the feet and less technically taxing. It feels like a different race and the next 10k is fairly easy and uneventful, I chat to other runners and we settle into a good pace, going up and over Loose Hill and down to the water station at Townhead St (on the edge of Hope village) as I take a handful of jelly babies I realise the next section is the steep climb up Hope Brink to Win Hill..and I’m not looking forward to it.

My maps shows the climb is around 220m of elevation in 700m of distance. It was so steep I was pulling myself up by the tufts of grass, using my hands to drive my knees down and trying to push myself up. I’m passed by a clever guy who is gliding up using a set of telescopic walking poles. It’s totally exhausting after 21k of running, and by the time I reach the top I feel like I’ve run another 20k. I manage a jog up to the next checkpoint which is Win Hill trig (where fellow strider Chris Lawson is on marshall duties) and from there it should be a nice easy downhill descent along the roman road..but it was at this point that I “bonked”.

Despite having taken two or three gels and a flapjack from the water station, I was out of energy. I felt a dizzy in the heat and my brain just refused to move my legs any faster than a walk.. I think they call it a “blood-glucose bonk”.. basically the climb up from Hope and the heat had done me in. I felt ok, but I knew that I needed to cool down and try to get some energy back or I’d end up in trouble. I take another gel, have some water and keep walking as quickly as I can..I’m being passed by quite a few people and although it’s frustrating I have to concentrate on moving and not worry about it. After about 20 mins I reach the end of the roman road (28km) and turn to climb Crookstone Hill. I’m in the shade now and I cool down, this makes a big difference and soon I start to run again.

From Crookstone Hill it’s back to technical Gritstone for the final 5k, passing Crookstone Knoll and pretty soon I’m back at Ringing Roger and heading down The Nabb (which seems much steeper going down on tired legs). At the bottom there’s a short sprint across a field then it’s all over!

Once I’ve recovered a bit I realise there are still other runners coming in, so at least I wasn’t last, and I can still walk back to the car so I can’t be that knackered. Not bad for a first AL race I guess.

Only one strider took part :

Here are the full results : 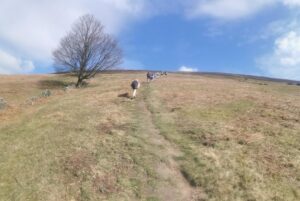 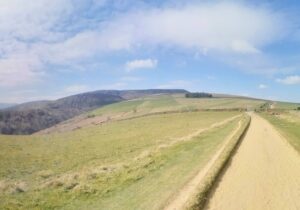