A little while ago, there was a post on our Facebook page bemoaning how old the club records are. Not strictly true as at key distances of 5k, 10k, Half Marathon and Marathon our current set of women have been re-writing the senior record books whilst at Doncaster this week there was a marvellous job of filling in the gaps with six club records set in one evening. Or was that seven?

Ryan Sheppeck (sunglasses) tracked Rob Byers until the last moment when he opened the throttle to just pip his training rival. Number 493 is Lauren McNeil who set a new women’s course record.

Hosted by Doncaster AC, this has always been a quality affair and with separate Vets and Open events, the Vets races are especially competitive. The format allows for competitors in the first race to watch the open event and we were treated to an excellent race for with 800m to go you could have thrown a blanket over the first half dozen. In the end, Tommy Power (Hallamshire) prevailed crossing the line in 14:48 with three others under 15 minutes and a further twenty men under 16 minutes. The women’s race was just as sharp with Lauren McNeil (Hallamshire) setting a new course record of 16:15.

This race has had a potted on/off history over the last few years due to the pandemic whilst the 2022 edition was under threat for a while until the local authority waived its charges for closing the roads. Unfortunately however this is to be the last ever event which is disturbing news as yet another quality club race falls by the wayside. We hope that Doncaster AC can find a way to continue the race.

With all these records being posted the sceptic might suggest that this was a short course but this race has been going since 1994. The finger then points towards modern carbon plate shoes and whilst a factor the number of turns and stretches of Paris-Roubaix style pave made this type of footwear uncomfortable. A possibility may be that nine of the thirteen Striders racing also train together and were specifically targeting this race.

And the seventh club record? Well, one Strider thought that may also have got one too but when he looked at his logbook he found that he had run ten seconds quicker back in 2019 and had actually held the record in his age category for nearly three years but this hadn’t been recorded on the website and thus escaped the scrutineers! 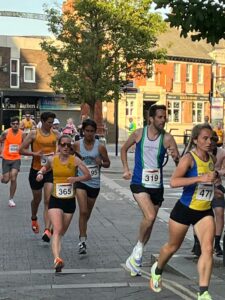 Caroline Brock being pushed on by  James Fulcher who is looking at his watch for no apparent reason. Following is Jordan Moat whilst just visible in the background Lucy Broom and Adrian Fisher look on with interest.