With a name like Freckin’ Frickley Frollick this event can only have been organised by the It’s Grim up North team! It took place in and around the Frickley Country Park on a cold, but dry, mid January day. Boasting 70,000 planted trees and 7 miles of paths and trails, the Country Park was developed on the site of the former Frickley Colliery in the years following its closure in 1993. The colliery, named after the nearby Frickley Hall not the local town (South Elmsall), was opened in 1903 and at its peak employed over 4,000 people. Now the major employer in the town is Next who have two giant Fulfilment Centres which dominate the landscape in the same way that the pitheads would have done in yesteryear.

Competitors were registered for one of a suite of races, namely an ultra, a marathon, a 20 miler, a 15 miler, a 10 miler or a 5 miler which then determined how many laps they completed. There was 30 minute gap between the start of each different race meaning that we were constantly overtaking, or being overtaken by, competitors from the other races. 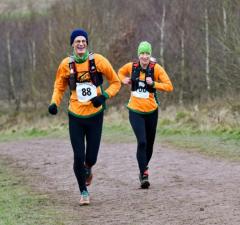 Dave and Sarah climbing the hill

Each 5 mile lap consisted of a mix of footpaths, woodland trails, waterlogged fields and a sharp climb, together with gates, stiles etc meaning it was quite technical in parts and very strenuous. For me and Sarah it was three laps, for Mandy it was two laps.

Sarah added to her growing trophy collection by finishing first female in the 15 mile race. Mandy, in her comeback race after injury, also won a trophy finishing 2nd female in the 10 mile race. Thanks go to Sarah for running the race with me; it’s always much easier running with someone else when there isn’t a large number in the race. Thanks also go to the organisers of the event, Its Grim up North Running, who put on another excellent day and provided the beer, chocolate, blingy medal and delicious cakes at the end of the race. 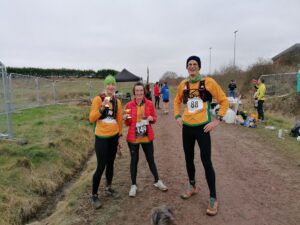 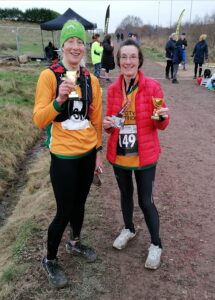 Sarah and Mandy with trophies!