A day of races from Marathon to 5k – all on the same circuit but different start times and number of laps to complete.

I admit I would not have considered this race or had it on a wish list if my son had not invited me to look after my Grandson on Friday. This turned into –
Son – my marathon training plan says I need a 10k race on Sunday, would you be interested if I can find one?
Me – of course
Son – ok we can do the Goodwood race!

I would not drive that far from Sheffield for 10k (but will go abroad for a marathon!)

Son lives in East Sussex so Goodwood motor circuit is not too far a drive from him.

As our start was 10.30 it wasn’t a particularly early wake up for us.

Car parking – loads of space on a field at the side of the racetrack.

Toilets – really not busy given the number of runners milling around.

No changing facilities but the car was near by and it was just about removing layers as it was cold and windy. There were places around the race track where you could get race ready. First outing for the Striders Hoody for me – so warm. Oh, I was the only Strider! I have only raced 5 times since I joined SCS and have got used to seeing lots of gold and green!

Baggage – just a place to go and put your bag – but somehow I always trust fellow runners!

Places to get coffee and bacon sandwiches – we didn’t but it all looked good.

Race pack pick up on the day (this is where the fun started for us, more on this later!)

It was good to see the marathoners and 20 milers already on the course (yes, shorts would be fine, but then some were running in all the clothes). The marathon started at 9.00 am and was 11 laps, subsequent races either 15 or 30 minutes later.

We saw the half start as we did a little warm up.

Getting to our start was good – someone read out times and you just followed until you were on the slip road. Son was after sub 44 so I bravely went with him, that was when I realised how near to the start line I was – gulp!

Once we were off we followed someone on a bike who led us onto the actual track. Though there were lots of runners doing different events it did not feel crowded, the track is wide. The surface is smooth – hurrah, no curbs or potholes to worry about, hopefully no trip hazards other than my own feet. Son got off into his pace quickly. I turned out not to be too near the front as we were joining so many other runners.

Then I just had to run. To be honest I did not have a plan at all other than to think of it as an opportunity to run a race and get into the groove ready for upcoming races. If lockdown did anything for me it got me running further but slower – I am coming back from that! Surprisingly I felt as though I was running into the wind most of the time! I probably wasn’t but some parts were definitely harder work.

Fun medal at the end – we all had the same medal but with different ribbons – no photo as my 6 year old grandson took a shine to mine! Bottle of water, can of alcohol free beer and some cereal bars at the finish. Stretched whilst we watched other runners finishing or continuing.
Then home.

I have emailed three times so far to ask for the results to be changed. I am not too worried as I came 1st with either time, would like to see Son’s name at the top of the list though (proud mum moment!)

Would I do this again? If I was visiting yes, but not from home. I have run a half marathon on the Oulton Race Track. Its good to have experienced this sort of race! 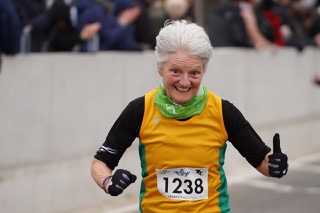 Ha Ha! Me doing what I love!

197 runners lined up for the Goodwood Motor Circuit Running Grand Prix 10k. Winner of the men’s race was Andy Leggott of Lonely Goat RC, in a time of 00:34:14. Maeve Kenny of Bourneville Harriers won the women’s race in 00:39:25. Well done to lone Strider Kate on winning the FV65 category!