Personally, I love racing alongside fellow Striders, last week’s Scunthorpe 10k was great to see so many in the green and gold. But, for those who like to blaze a trial and be the only Strider around, I think I’ve hit on the perfect formula: Run a half marathon, right on the sea front, 2 hours away from Sheffield, in the middle of one of the worst storms in 30 years.

The Great North West Half Marathon hosted by Fylde Coast Runners is in its 33rd year and takes place in Blackpool, on the northern promenade between the north pier and Little Bispham. A last minute route change due to the lower promenade being susceptible to “sea incursions,” meant instead of 2 small, and 2 medium laps, the race was to be 2 large laps. 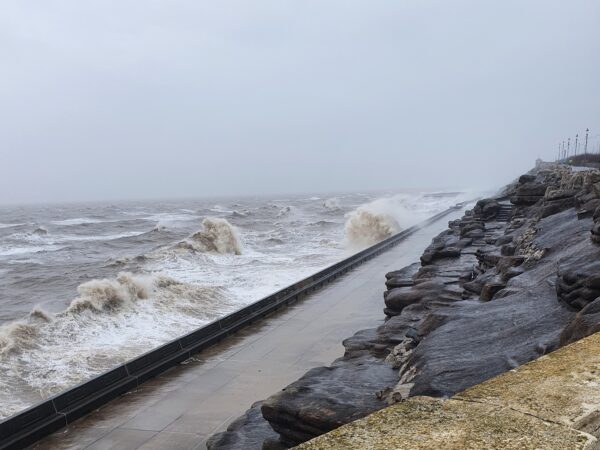 Picking up our numbers, doing a warm up and taking your life in your own hands by using the portaloos in high winds (nobody wants to be in one of them when they go over), it was clear this was going to be “character building.”

11am came and we lined up at the start, the starter made the enlightening observation of, “you all signed up for a half marathon, in Blackpool, in February, what else did you expect?” And with that echoing in our ears we were off.

The first km was into the wind, but slightly sheltered by the 479 competitors (their website says they normally have 1500 entrants so clearly the weather put some off). After turning and heading north, the wind at our backs, the next 5km felt pretty decent. All of this was now on the top promenade passing behind and in front of various displays getting ready for the illuminations. Bit surreal running past Postman Pat and the like.

Turning at 6km and heading back south, the 40mph winds took their toll. On this first lap, I managed to hold my pace pretty well for a couple of km, but the winds were gradually getting stronger, and I was not. One strong gust pushed me up against a fence, and another ripped my number from one of the pins. Making some running repairs to my number, I put my head down and took solace in the fact that despite feeling like I was suffering, I was overtaking a fair amount of people in this 5km.

By the time we turned at 11km, the wind speeds were up around 50mph and even though it was on our backs, it took a lot just to stay on your feet at times. I had probably overdone the headwind section and the strength was gone, but I managed to stay upright and make it to the 16km turn. Just 5km to go, how hard could it be?

Not for the first time in the race I found myself questioning what I was doing. The winds now at their strongest and the rain starting to hit us (or was it just spray from the “sea incursions”?), the final 5km felt like a marathon. The race had definitely become one of surviving, and a race against other people rather than the clock, so it felt good that I was still overtaking some.

The section also saw another close encounter with a fence, worries over the huge illumination boards being blown over onto us, and the loss of all feelings in my fingers (because of course I went short sleeves and no gloves). After what seemed like eternity, we hit the middle prom and the last 400 metres. Trying to muster some sort of sprint, I upped the cadence but was pretty sure I was just running on the spot by now. Eventually, between the gusts, I made some forward progress and crossed the line. 1:40:47, my slowest half marathon race to date.

A nice dayglo t-shirt, a chocolate from a pile of celebrations, and one of the chunkiest medals I’ve seen (even bigger than the Scunthorpe one last week). Got to give a massive kudos to Fylde Coast Runners for managing to put on a very well organised event, and to all the marshals, first aiders/paramedics, and everyone involved. It was bad enough running it, but it must have been terrible standing still in it. I’d also like to mention those at the tail end of the field. The runner in 479th finished in 3:28:00, I had stayed for a bit but was on the road by then and I know the weather had turned even worse. I do think the people at this end of the timing charts have real guts, especially in these conditions. 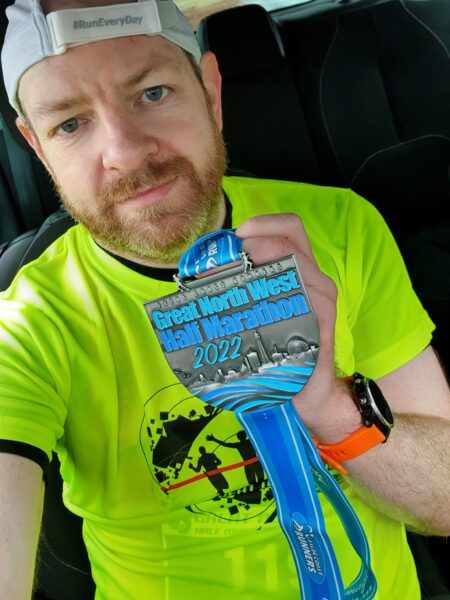 At the front end, the men’s race was close with the top 3 still all together when I saw them with 2km to go, and only separated by 8 seconds at the finish, with Josh Hall-Brown (Halifax Harriers) taking in the honours in 1:17:34.

The women’s race was even closer with the top 2 finishing within a second of each other, Gill Draper of Lytham St Annes RRC winning out in 1:30:35.

Full results can be found on the Fylde Coast Runners website. 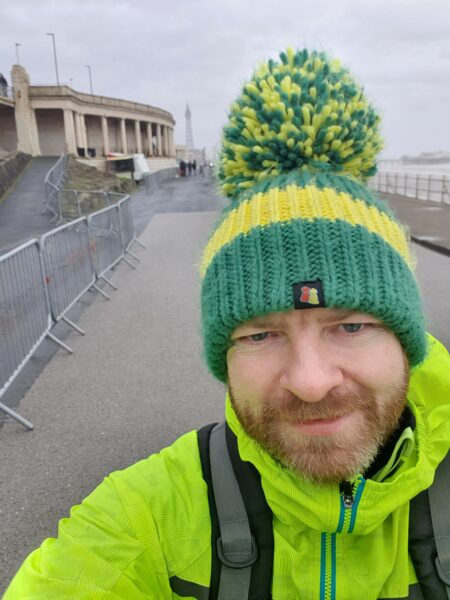