I know Kate Morris has done a report for Grindleford Gallop but I wanted to do another one, here it is 😁;

I entered the GG as I thought it would be a good training run for the 40 mile ultra I’m doing in May. I’ve done it once before back in 2020 in just under 4h6 minutes, I was expecting a similar time or if I was lucky I might just scrape under 4 hours. I already planned to walk the 3 major hills and almost use them to rest and refuel, then I would try and run the rest and use the downhills to my advantage.

As an average paced runner I decided to start in the middle of the pack. I knew from last time the first km would be slow due to bottle necks but this time it seemed like we were stopping and waiting more often, probably due a higher number of entrants.

We eventually picked up a bit of pace just as a runner just ahead went head first into a stream, unfortunately for him it was caught on camera but he did get straight back up and carry on so must have been ok, apart from his pride of course.

I enjoyed a walk up a grassy field and managed to not get overtaken too much. As we descended into Eyam I found myself over taking a fair few people but a horse in the adjacent field promptly showed us how to really gallop as it sped across the field, I wasn’t keeping up with that!

Once out of Eyam it was gradually uphill, on a variety of surfaces with a head wind to battle as well. We ran through multiple fields with multiple stiles before we were treated to a long decent, again I overtook a fair few, mainly the ones that had over taken me on the uphill.

Once we reached a little village I found myself at the front of our little pack with the many runners in front of me not visible, time to follow the arrows, only I missed one, (same thing happened last time) meaning I missed the turn off to the Monsal trail. Luckily a runner called me back and I made it onto the Monsal trail.

A few kms of steady running then I hit the feed station, I only picked up a couple of jelly babies and carried on, knowing there was a massive hill coming up where I planned to eat my marmite sandwich on the way up. Sure enough the hill was a great opportunity to have the sandwich and a few puffs on my inhalers. Briefly it felt like I was on a hike, ‘must remember to run when I get to the top’.

Next came rolling fields down into Chatsworth, where I got involved in a discussion about mating sheep and why they are marked.  As last time Chatsworth was the worst bit. Despite being beautiful it was hard running on the flat on a hard surface and it felt like it was going on forever. I was looking forward to the climb from Baslow up to Froggatt edge.  Again I used the climb to refuel, I even attempted to run parts but they were short lived. Once at the top I felt a second wind or maybe it was just the tail wind pushing me along? The views were stunning and the sun was out and amazingly nothing hurt.

The final decent was very technical and I was stuck behind another runner but I used him to guide me down. Once at the bottom it was time to stretch the legs for a sprint finish.  I was happy to finish in 3:51ish but even happier to get the complimentary soup and tea. I really would recommend this race to anyone no matter how fast or slow you are. 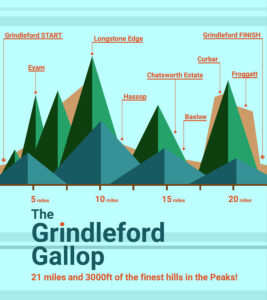