A bucket list race for me for as long as I can remember (not long – menopause brain). Sadly, every previous entry has resulted in a DNS due to one mishap or another. After a year off running due to a b********d old bird hip and having been told my running days were largely over, a post baby ‘looking for a challenge’ mate persuaded me to risk yet another entry and lo! I found myself clocking up my biggest mileage weeks evs! This is not in fact down to any measure of tenacity on my part, but pure luck with a dollop of winging it!

Race day dawned and I pitched up with a couple of mates on the drive of a mutual friend and Grindleford resident who not only provided parking within a stone’s throw of the race start … but the sole use of an outside bog … result!

Having considered and discarded the notion of a pre-race warm up, we duly lined up with our fellow gallopers and awaited the countdown … the claxon went off and dear God …. the bun fight to the first gate was an experience to say the least! Talk about getting swept up in the furore! 200 metres in and frankly I was knackered.

As the race settled down and we hit the first climb over the fields towards Eyam (little known fact – I’m a descendant of the Hancocks of Riley, a family almost obliterated in the Eyam plague, the stone encircled graves of which we passed en route), my heart rate calmed to something heading towards sustainable and I found myself doing my trademark teeny step joggle up to the top.

At the turn towards Foolow I passed a couple of mates walking the route who informed me that I was 5th lady. Suitably chuffed I shuffled on, deluding myself that there was a chance I may not slip down the rankings to 10th by the end of the race.

Longstone Moor was characteristically hideous with a raging headwind and multiple stiles to navigate. On the long descent down in to Great Longstone I was joined by fellow Strider Warren Brown, who provided an excellent wind-break along the entire stretch of the Monsal trail. Photo evidence shows that we were almost caught by the galloping gazelle Gilly Bob Thornton … I hadn’t realised! Missed the chance of a natter over a jelly baby or two.

I joggled all the way up the Bakewell climb and shared a few laughs with walkers on the long run over the fields to Chatsworth … something about someone’s pert little arse and me having had the pleasure of running behind it for quite some time.

I’d been dreading the run through Chatsworth as on my recce it had been seriously vile … goes on for evs! But herein lies the benefit of a good recce, being prepared and taking it steady, I found that I actually felt pretty good and moved up the field a few places.

The loooooooong climb up to Baslow edge proved remarkably manageable too – sticking with my tried and tested climbing technique (old lady joggle, but hey it works!) I was still working my way slowly but surely up the field and indeed once at the top and back in to proper running territory I managed to overtake a few more weary soles.

Alarmingly on the run over Curbar, my upper quad was threatening to go in to complete spasm … happened to me once before at Dewsbury 10k, I was reduced to a lift to the finish courtesy of St Johns ambulance! I tried desperately to relax, but deary me, the steep technical descent back down in to Grindleford had my quads screaming! Back in the flatlands I mustered a rather impressive, even if I do say so myself, sprint to the line and the race was done. Funny how you can go from 6’ish minute mile’ing to not being able to run another step in an instant! Or even walk …

‘Wind-break’ Warren (you can just see me peeping over his shoulder). Photo courtesy of Harriet Eisner. 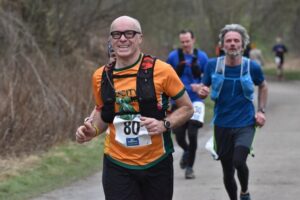 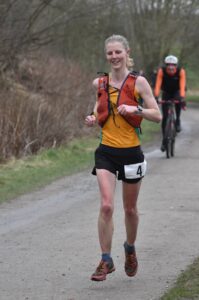