The route is right for a short (5.25 mile) mid-week urban trail sort of race. It takes place in a green space you’d not expect to find in the city, but this is Sheffield so there are loads of such spaces here. The route actually includes a short section of the Sheffield Way Relay, the string on the balloon that the Strava map showed after uploading.

A quick-ish dash down over broad field paths, sharp turns and sharp up-hills in an ancient native woodland – Shirtcliffe Wood around Shirtcliffe Brook – that was run twice round, and a thigh sapping effort back to the finish. Easier than The Trunce the night before, less scenic than The Crosspool Crawl (in July), much more fun than staying in.

Sections of the route were single-file, so chat with other runners was mostly over the shoulder to the person behind. I got chatting to one Strider who was in front of me, about how there were a great many Striders in the field – we could see six ahead of us out of seven runners. He did not realise who I was and so proceeded to tell me about the Trail Series, the Fell Championships and the Road Race Championships. It was when he started telling me about the Ruby Anniversary Week series that I decided to overtake. ‘Oh, it’s you’, he said. (NB To Stuart – this race isn’t part of any series – it was just for fun – editor)

‘Winning’ is not something many participants seriously anticipate; we are there for other reasons and get other motivations and pleasures from racing. Except it turns out that I was a winner – only age category perhaps, but a winner nonetheless. I felt a ‘winner’ by completing the first of two laps in the wood without being lapped by a fast ‘un. Some are winners by posting a PB, or simply completing the course. We win when a run makes us smile – the sunshine did that on Tuesday evening. Well done to all 47 Striders who raced and finished. Particularly well done to Robert Byers (SCS) who won, in 34:10, and Caroline Brock (SCS Captain) who was first female, in 37:43.

My first ever race prize was in the Slow Bicycling Race at my Primary School Sports Day, aged 10, I think. I got a Certificate. I had to wait about 12 years for another prize – second place at the Lyke Wake Festival Short Race (2nd place – out of 2 adult runners that year). I won a four finger KitKat once (New Year’s Day Awakener, Whitworth), which was nice. A bar towel at a race in Ireland. A (large) bag of Jones Crisps at the Anglesey Half. A Spot Prize of a sack of kindling at the Ravenstonedale Red 10k. I might have to declare the win at the Handsworth Hobble to avoid being categorised as a ‘professional’ in future.

Striders running, and their positions and times:

There were 162 runners / finishers 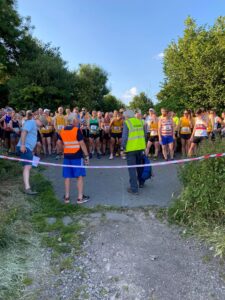 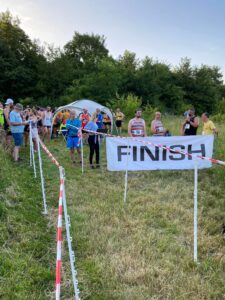