Ilkley is a Victorian spa town in West Yorkshire, approximately an hour and a half drive north west of Sheffield via Leeds. We had planned to make a weekend of it by setting off early on Saturday, staying over near the famous Cow and Calf rocks on t’ Ilkley moors, and then heading to the run on Sunday after a restful night’s sleep at the hotel.

Things didn’t quite go to plan when the car would not start and our early departure time got pushed back to midday after waiting for a couple of hours for the roadside recovery van to arrive. The journey took a lot longer than expected due to my mum’s preference of not going over 55mph on the motorway. I also discovered that my sister has a major fear of motorways, meaning she had to lie down on the back seat with headphones playing a meditation. I am not entirely convinced by this and think maybe it was a ruse to have a nap!

After being told numerous times “Google is taking us a funny way” by my mother, we finally arrived in Ilkley by late afternoon. By which point, there was no way I was sticking to a pre-race alcohol free night! So my race prep turned out to be half a bottle of white wine, burger and chips plus a massive dessert and then an amazing 9.5hrs uninterrupted sleep – parents out there know how this is the holy grail of amazingness! So on to race day…

The half marathon is organised by the Ilkley and District Round Table, a fundraising organisation who support a range of local charities. The event village, located on West Holmes Field on the banks of the River Wharfe, had a wide range of entertainment, food offerings and the usual facilities such as bag drop and toilets. Later in the day there was a live band, the beer tent and gin shack opened and at 1:34pm there was even a Spitfire fly past (had to be precise to avoid air traffic from Leeds Bradford airport).

The route is on road and is mildly undulating apart from a short, steep hill at around two miles and another one at about 11 miles. Or so the website says, if you are used to Sheffield hills, the ones in Ilkley are more like speed bumps.

The main challenge on race day was the intense heat; there were four water points on the course and a number of considerate locals came out with hose pipes to shower runners as they were passing. The local support was absolutely brilliant, and you can tell the event means a lot to Ilkley as a town by the large number of people who lined the street with signs of support and jelly babies. What was truly amazing was the team of firefighters who ran in full uniform and oxygen tanks, and even one who was wearing a bear outfit!

After the run I went for a dip in the River Wharfe which was a really great way to cool down for the journey home. I would definitely like to do the run again, I was hugely impressed with the organisation of the event and the beautiful scenery we ran through. 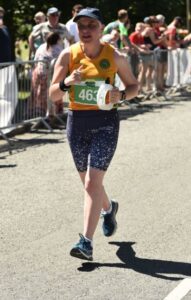