Being married to a Manx woman I have visited family in the Isle of Man over the last 16 years. One of the most frequent times of the year we visited was, and still is, at Easter. Most Easters we ventured down to Peel on the Saturday, forgetting about the Peel Hill race, for a spot of lunch in the Creek pub and we would walk out into the street in the way of a stampede of runners. I would always ask ‘what’s going on here?’,forgetting  what happened  last year and the year before that and so on. Anyway, my late father in law would explain, ‘it’s a series of races over the Easter weekend’. Finally in 2018 I thought it would be great to enter the 2019 event, well we all know what happened in 2019 don’t we???

Peel Hill race on Saturday, Men’s is about 3.5 miles with over 800ft of climbing, Ladies’ is about 2.5 to 3 miles and a guess at 750 or more ft climbing, up this beast of a hill and back down

In 2021 it seemed  like a very good idea,  but must admit  in the week  leading up to the  weekend  it certainly  didn’t  look  like one of my best  ideas after having  covid  and doing  the Sheffield  half  the day after  coming  out of  isolation.

Did I feel prepared to do 3 races on consecutive days? Did I heck

Good Friday  here we all are at the start  of the  race with  a record  number  of entries  for all 3 races with 16 University  teams and well over 400 runners for the 1st  race. It hadn’t  been  a particularly  warm  day  and the sea fog was creeping  in, making  it a bit chilly for the start but the atmosphere  was good  with quite a few people  spectating.

On the start line not quite knowing how well I was going to run so started pretty much at the back hoping to get under 55min. With the 1st km being flat along the breakwater. I soon realised  I should  maybe  have started a little  nearer  the front  as I had to  battle  through  quite a few slower runners.

2km was a climb out of Port Erin where I passed a few more runners, on into the countryside which flattened out for a few km.  By this time I realised I could maybe get under 50 minutes so I kept pushing on. Soon we dropped down to the coastline again and ran into Port St Mary on the coastal path taking in the scenic coastal views. Then came the 2nd climb out the coastal town over the tops to Port Erin and was having to work a bit harder to keep the same pace going.

Then I came to the 8km marker (still on track for sub 50) just outside Port Erin which meant it was all downhill and flat to the finish just before  the breakwater. However the  legs were  starting  to feel  tired at this point  so I couldn’t  exactly  sprint  the last couple of km and had to remember  I had still got two races left over the Easter weekend.

With all that in mind I managed  to make the most of the downhill and keep some  of the pace going  on the promenade towards  the finish where I had family  cheering  me on over the finish  line in a  very satisfying 49:16

There are two separate races for this event as the women do a shorter route.

Their route  is roughly  2 and half  to 3 miles just up to the monument and  back, whereas the  men’s race  is 3 and half  miles with an extra  hill thrown in  for good  measure.

Not feeling too bad post 10k and my cheerers had more than doubled in size for the Peel Hill climb.

I did a warm up and did a few stretches  feeling OK at this point until I started  watching  the uni teams warm up  and stretch, oh to be  so young again. I would have hurt myself if I tried to copy their exercises.

Men’s race first, just over 200 of us and we all line up on the start line, all the young ones at the front and the older ones at the back. There was even an 80 year old doing all 3 events with us, I hope I’m still alive  by then, never mind running  up some hill and  back down  just for the hell of it.

The starter blasts his horn and the front runners set off like Linford Christie tearing round the marina to the track that starts the climb up the hill. Again well attended by spectators lining the course up to the monument with lots of encouragement.

I didn’t  sprint  round  the marina, I just took at a more sedate pace but steadily  progressed  through the field  of oldies. Then you hit the track up the hill and your legs start to scream at you saying what the hell are you doing? Then you turn a corner and it gets steeper and your lungs and heart really start to object at this point saying ‘enough is enough’. Just like everyone  else you  start to  walk before  your heart implodes and  before  you know  it becomes  a walking  race up most  of the hill  till you  get  to the false  summit and  you  get a respite before  having  to climb again up to the monument on the summit. On reaching the summit you would  think  that was enough  of a challenge but no you don’t  turn  round  and head back  down. You run past the monument and down to this field and across it. Guess what’s next,   yep up the hill again back up to the summit. Once up at the summit the view is spectacular and then you can look forward to a long downhill which can be a bit tricky in places. I managed to pass a few on the downhill and create quite a gap behind me.

The noise from my family at the finish was quite loud as I could hear them as I came down the hill which helped me keep going. On reaching the road at the bottom my legs felt like jelly and it was a struggle at first to get my stride back. I soon got my running legs back and managed to pick the pace back up making sure no one was going to sneak up behind me before crossing the finish line.

I completed 3.5 miles with 842 ft elevation gain in 35:27 averaging just over 10min miles which considering the course I was quite chuffed with.

5km along Douglas Promenade out and back with a total 7ft elevation gain with good conditions. It would have been great for a PB if I hadn’t already done 2 races.

Preparation on Saturday evening was perfect, my lovely sister in law had hired a hot tub over the Easter hols which was great for aching and tired legs. But unfortunately drinks were also provided while in the hot tub, so 2 glasses of champagne and a bottle of red wine to myself. I was a little tipsy so after getting dried off and dressed we finished off with a couple of gins.

Surprisingly, the next morning I didn’t have a hangover but my legs felt so tired and was left wondering whether I was going to run the 5k or walk it. I arrived in plenty of time for the start of the race with the women doing theirs first which gave me plenty of time to contemplate doing a warm up. I had a couple of attempts at getting my legs moving, then eventually I managed some kind of warm up which wasn’t pretty.I wasn’t confident in doing a reasonable time this day and had hoped to get under 25min but looked like I might have to settle for sub 30.

I reached the 1st km marker and was surprised to be under 5 min so I tried to keep the pace going. Going out, there was a bit of a breeze which was quite nice and it wasn’t until I got to the turn round that I realised how warm it was in the sun. 2 and a half km in. I’m still on track for sub 30 min  so I just kept pushing on passing a few runners along the way. With 1km left to go I was in a good place to get under 25 min and was even a chance of getting under 24 min so I kept pushing on. On approach to the finish line a few came sprinting past me but I had nothing to answer back with and to be honest it didn’t matter because when I saw the timer it was just over 23:30 so I knew I was doing well. I ended up crossing the line in 23:49 which was 3 seconds quicker than Millhouses parkrun 2 weeks earlier.

If anyone ever feels like visiting the Isle Of Man around Easter then I can definitely recommend this event of 3 races. You can choose whether to do all 3 or just enter one of them.The island is a lovely place to visit if you fancy taking a longer break to see some of the sites  and enjoy some of the local delicacies. 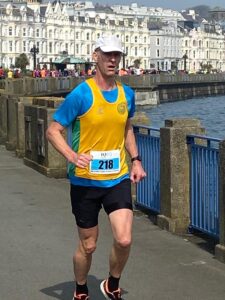