The Isle of Mull half marathon is organised by the local running club – Mullrunners. It’s a long-established race with this year being the 32nd annual event. It’s not like Sheffield or Leeds or any major event; it’s small and very friendly …..and lovely.

Now, clearly Mull isn’t somewhere you can pop to and be back for lunch, it requires a bit of a logistical exercise. Fortunately, the kind people of Mull organised this year’s event whilst Tramlines was on in Hillsborough Park which meant that I was free of parkrun obligations and able to participate in events further afield.

However, due to a rather nasty chest infection, my running for 2 weeks before the half was curtailed to just one run of 10k – ‘so what’ I thought, ‘it’s only a half – I can do that’. I found out that whilst I can, the event didn’t go as smoothly as planned.

Anyway, a trip up to Glasgow on the Friday, a cheap hotel and at 5am I was standing on the station platform waiting for the 5:20am train to Oban. Just over 3 hours later and after a scenic journey, the little 2 carriage train pulled into Oban station. Now of course, I couldn’t just do a half, so I took in Ganavan Sands parkrun (about 2 miles outside Oban) in the morning. I had completed this event before and whilst I knew it wasn’t flat, I had forgotten how hilly it was. It makes Hillsborough look kind ! It’s only a small parkrun, just 35 runners this week (mainly tourists) and 17th position for me in 28:28.

A quick taxi back into the town and then a ferry over to Mull. The ferry took an hour and conveniently, the start of the race is timed to facilitate day trippers such as myself with a sensible start time of 1:30pm. After a check in where I collected my race number, ankle timing tag and free t-shirt, I dropped my bag off on a coach which takes them to the finish (it’s very well organised). There are actually 2 races, a 10k and the half. The 10k starts at a similar time and basically uses the last 10k of the half marathon route (runners are bussed to the start line). As such, it’s over and done with by the time most of the half marathon runners are finishing.

The start line for the half marathon is outside the Mull & Iona Swimming Pool & Spa, a few hundred yards from the ferry port. After a short loop around a nearby OAP home, you run back towards the ferry port of Craignure, up a small incline before doubling back and then staying on the main road to the town of Salen. This road which is mainly flat follows the coast and throughout the run you have fantastic views of the Sound of Mull on one side and pleasant hills and fields on the other. Whilst you are running on an A road, there were no issues; traffic was sparse and all drivers gave the runners a wide berth.

Race support (drinks & sponges) were available at 3 stages in the run from great volunteers who encouraged all runners throughout. As mentioned, despite my lack of preparation, I thought I’d be fine but after 5 miles my legs suddenly had very little left in them. The last 8 miles were dark – ‘move your legs’ I was saying to myself as I stumbled on getting increasingly slower. Maybe still having half a course of antibiotics to take and a hilly parkrun a few hours before wasn’t the best prep??

I didn’t overtake one runner in these 8 miles. ‘ I’m never running again ‘ was a frequent thought. Each mile seemed more tortuous than the previous one. Even a flat road seemed like a hill. Every runner who passed me offered their encouragement……I tried to express my thanks; more often than not I’m sure I just grunted ! To wrap things up, whilst the weather throughout the event was grey with mizzle, about a mile from the end, the heavens opened and I became drenched.

Every runner receives a shout out and a warm round of applause as they approach the finish line which I plodded over. I was exhausted.

Banana’s, a wide range of energy bars as well as loads of water were freely available at the end which I was grateful for – oh and a little medal as well ! The race is sponsored by the Salen Hotel which by chance is where the finish line is situated. Many runners were benefitting from alcoholic hydration as well as the shelter this building provided.

The bus which had my bag took runners back to the ferry port, another hour ferry, a 3hr train back to Glasgow, a short walk followed by a 4 ½ hr drive home, and I crept in the house just after 2am. I needed my bed !

For those of you who haven’t been to the west coast of Scotland, there are quite a few races throughout the year and whilst it is a long way to go and isn’t as easy to reach as a local event, the scenery and the welcome does make up for it. Despite never wanting to run at one stage again, I am aware that I am in another half in Scotland in a few weeks….and one where I know that there will be other Striders running!

The first lady was Christie Ford from Bellahouston Road Runners in a time of 1:25:08

There were 129 finishers and the full results can be found here. 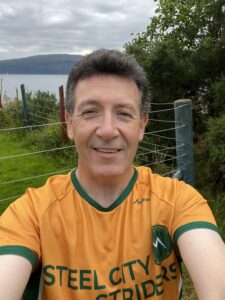