The Ladybower Trail Marathon is on a Friday, has a pretty small field, and is in beautiful surroundings on a mixture of trails, gravel paths and minor roads – an ideal first marathon for those of us not so keen on pounding the streets for hours on end.

The weather on 10th June was pretty good too, cool but mostly dry. Heading out from the Fairholmes green space (under the dam wall) the route followed the reservoir road, then the trail around the Derwent, Howden then Ladybower reservoirs, in a clockwise direction, with the half marathon point just after the road bridge across the Ladybower, before heading back up the woods on the west bank of the Ladybower.

Then at around mile 15, just after one of the regular 5 mile feed stations, the route takes a brutal turn for the worse up a long bumpy slope to Lockerbrook Heights, where a teenager with a trumpet welcomed runners staggering up the hill with a combination of the Last Post and Entry of the Gladiators (aka the Circus Clown song). After that indignity, there was an equally brutal descent for tired legs down through the Gores Planation back to the Derwent dam, before the 2nd circuit around Howden and the east side of Derwent back to the finish at Fairholmes.

The atmosphere in the middle of the field was chatty, everyone seemed to be enjoying the views as much as the running, and virtually all of us walked up the Last Post hill.

The run was well organised and relaxed, with feed stations offering orange segments, bananas and tomatoes as well as the traditional gels.

I had absolutely no idea what I was doing, went out far too fast, and started staggering a bit after Slippery Stones with a few miles to go, but everyone was helpful and supportive throughout, not least fellow striders Sally Twigg and Philip Kelly who helped spur me on.

I’m a Type 1 diabetic, and after fantastic support from Millhouses Speed trainers and many other Striders over the last few years (which included a very scary pandemic for the likes of me) I decided this was the year I’d attempt my first marathon.

Sport of any kind is not easy for T1 diabetics, as we have to manage our blood sugar with injections or insulin pumps, and getting it wrong can make you very ill. Exercise and heat and stress all complicate that blood sugar control too. So a marathon felt like a big deal, and getting round without collapsing meant a hell of a lot.

Of course, all the other runners were lounging around and chatting as I finally staggered in almost in tears.  Only to find my watch saying I’d completed 26.09 miles at the finish line, so I had to hobble round the field again to reach the magic figure before retiring to the Fairholmes cafe with my proud wife and a sausage bap.

I’ve been a T1 diabetic since I was 9, and after years of thinking I’d never be any cop at any kind of sport, this running club has quite simply changed my life for the better, so thank you. Wow, I’ve done a marathon!

A few days later, I attended a local Move More event for diabetics, and met fellow T1 diabetic runner Martin Draper, from Somerset. He was wearing some kind of ‘Marathon 200 Club’ tee shirt, so I obviously asked, have you really done 200 marathons? 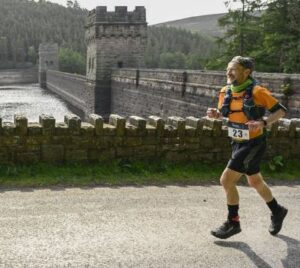