A small group of Sheffield Striders, Smileys and Tri Club met up for the Staveley Trail races last weekend in a delightful carnival atmosphere. Staveley, in the Kentmere Valley, is a pleasant village about five miles west of Kendal.

A choice of 5K, 10K and 18K races are offered. Most of the group opted for the 10K which turned out to be 11.7K with 350m ascent. Starting and finishing at the recreation ground, serenaded by the local steel band, the course rose rapidly from the village to the fells around Reston Scar. Road gave way to grassy footpaths, stoney bridleways and a couple of stiles to keep us challenged. The fells of the Southern Lakes made a spectacular backdrop for the race.

I have concentrated on road races in recent months so it was great fun to leave tarmac and concentrate on the various surfaces and conditions of Kentmere. The course was well marshalled and signposted. 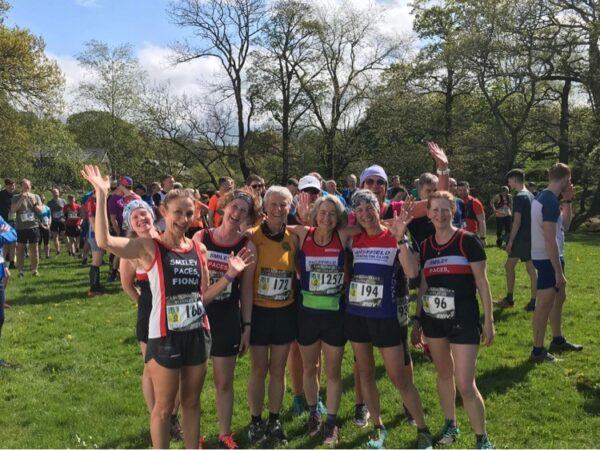 Smiley Striders on Tour in Staveley

Tim Farron MP a seasoned lakeland trail runner awarded the prizes which included free entry into next year’s race so it looks as if we’ll have to give it all another go next May. A few more Striders would be very welcome.