Sunday 3rd April, my first marathon and over two years in the making since the 2020 edition was cancelled. Training had gone well and I’d managed to avoid the ‘C’ word in the run up, I actually couldn’t quite believe on that Saturday night that I was going to make it to the start line.

After a super early start, and a slice of honey and toast (all I could stomach due to the nerves) we made our way over the Pennines and managed to find a parking spot less than a mile from the start. I joined the epic queue for the already rather grim portaloos, dropped my bag off in the Athletes Village (which was super quick and efficient) and made my way to holding area. There was a short wait as earlier waves were loaded, once we were called through there was another 5 minute walk down to the start line. At this point I somehow (inadvertently) managed to end up in the wave in front, but thankfully realised and ducked out of the way just before they set off. This meant I was in prime position to set off at the front of my wave which I figured could be a good thing (less weaving) or a bad (a speedy start). I spotted Kate W in the next wave and popped over to say hello and then we were called forward – we were off! I set off at a fair pace down the hill but had a word with myself and settled into a pace very slightly under my target. We wound our way towards the centre of Manchester with people steadily passing me.  The support in the city centre was brilliant and I had to avoid the temptation to pick up the pace, which was made difficult because the GPS signal at this point was all over the place and my Garmin was telling me I was running over a minute slower than my goal pace.  As we left the city I spotted Kate Scott, smiling as ever and cheering me on as she headed into the centre. I started to take on some fuel at mile 5, my marathon training buddy, Jeni, had drilled the importance of this into me having suffered in previous marathons, and I had spent some time working on this during my long runs and I feel I got it spot on.

Next stop was Old Trafford where I saw my cheer crew for the first time (twice), and then out along the A56 for a 5 mile stretch, for me the least inspiring part of the course.  My pace was really consistent but I’d heard from many people that the marathon only starts at 20 miles so I was under no illusions that this rather enjoyable run would continue. I spotted Rob Byers hurtling back the other way and tried to shout some encouragement but my mind blanked and I think I was hollering ‘Go Luke’ – sorry!  There were more familiar faces shouting support around mile 12 which gave me another boost, one of things I found surprising but super motivating were the number of supporters clocking your name on your race number and shouting your name like they knew you – it was brilliant… i.e. “Go Claire – you’ve totally got this”…. me (in my head ) “I totally have”! The Strider shout outs were also really appreciated.

Miles 12-14 flew by and I was still feeling like I was running within myself, quite a strange experience in a race as I have a habit of going out too hard and then trying to hold on.  I went through the halfway point in 1.46.21 so was well under my target of 3.35, if I could keep this pace going, but I knew it was possible that it could all fall apart in the last 6 miles. This middle part of the race was completely disorientating as we passed other runners a number of times and I couldn’t work out whether they were ahead or behind us, but it was great for spotting other striders as we ran through Timperley and Altrincham.  At Mile 14 I was joined by Damian who was running for Sense, and we passed the next 5 miles together, it was great to have some company for those middle miles but at 19 miles he decided he had overcooked it and encouraged me to run on.  I was still feeling quite strong so pushed on through the next couple of miles picking up the pace ever so slightly. Mile 24 was when the going got tough, and I started counting up to 20 and back to distract myself, mile 25 and I started telling myself I could afford to walk if wanted to, and then after what seemed like the longest mile of all we were into the finishing straight and I managed to find some residues of energy to pick up the pace for the last 200m. What a great first marathon experience – superbly organised and supported, perfect weather conditions, and well under my target time.

There were some superb performances from the green and gold. Rob Byers was the first male strider home in 2.29.52, and first female strider was captain Caroline Brock in 2.56.38.  Dave Beech ran an outstanding time to smash the Male V65 striders record (03.50.05), and Kate Waddicor logged 4.03.19 to set a V65 striders record (adjusted for age using WMA standards would equate to 2.48 – amazing!). The race was won by Jonny Mellor in 2.10.46, with Becky Briggs winning the female race with a PB of 2.29.04. 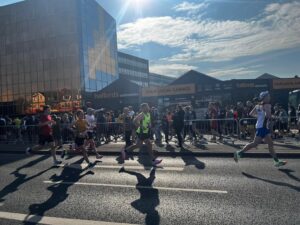