It comprises:
• a 12-mile cycling section from Newtown to Belan, including three major and two minor road crossings where the canal was blocked after it was closed
• 5½ miles by canoe to Pool Quay.
• 9½ miles on foot to the finish at Crickheath, with two more road crossings at blockages on the A483 and two more at minor roads. 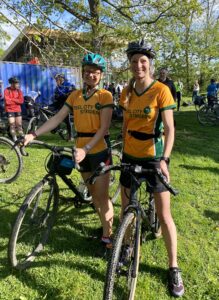 This was my first triathlon, one I was keen to do as there was no swimming (boring), but instead a canoeing section.  You can do the event in pairs (or more!), and I chose to compete with Alison Barrett, who certainly knows her way around a canoe better than me (I was a first timer!)

Billed as an endurance event rather than a race, it’s aimed at families and experienced triathletes alike, I’m guessing with the aim of raising as much money as possible for the restoration of this beautiful canal.  You could choose to do one or all three sections.

Saying ‘it’s not a race’ is a bit like Parkrun’s ‘it’s a run, not a race!’.  Those of us competing in all three sections were of course super-competitive and the banter during the race was friendly and funny!

The event was brilliant.  Logistically it worked perfectly, the weather was amazing, the canal was beautiful.  Canoeing 5 miles is a LONG way, this took us 1.5 hours and we lost places on this section to those with their own speedy boats (we hired one).  The marshalls were very friendly.

If you’re wanting to try a triathlon, or have a great day out with something different, I can highly recommend this event. 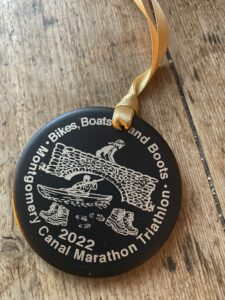 Alison and I (named Steel City Sinkers!) came third with a time of 3 hours 42 (from start to finish), beaten by one of Alison’s old GB Quadrathlete buddies!  There were 138 competitors.  The results are almost impossible to decipher, but there’s a link below. 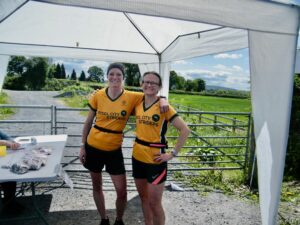 Definitely thinking of doing this again next year.