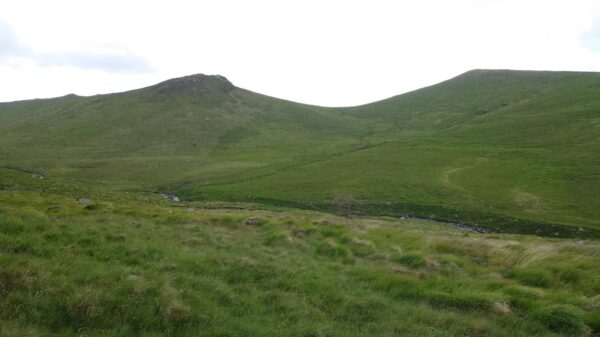 The final climb (runners for scale) (really, they are in there)

For some reason I seem to be very short of mental stamina at the moment. I’ve done a couple of my best ever 10ks this year, but I’ve struggled to train, which means I’ve not really done any fell racing and my “warm-up” long race at Hathersage didn’t go well.

I’m ever the optimist though, so after a good night’s sleep and a hearty breakfast I hopped on the transfer bus outside Kilbroney Park thinking: “If the weather stays nice and overcast and drizzly, we’ll be okay.” I sat down next to a guy from Omagh, who, when I answered his question about where I came from, said: “Oh, I used to live down Eccy Road.”

I should have read my previous report. This race is not okay. And the last hill got me again, in exactly the same way as last time.

I won’t go over the course in detail, I did that last time. Key points for 2022: far too much walking; a fall that definitely happened but was early on so I can only remember thinking “I’d better remember that for the race report”; going the wrong way at a bridge and being called back by another runner; another fall that landed me on my arse in a very wet bog; the fact that my expensive trail shoes refuse to break in after months; the something that went ping under my ribcage with 8 miles to go and still hurts…

Sounds awful, doesn’t it? But I already love it in hindsight: the view of the sea from the top of the first climb, and the view from the top of the road section that goes on forever; the camaraderie that comes in a long race where you don’t see many people; the relief when you hit the last few kilometres of flattish forest trail; the fact that for once I fuelled properly in a long race and didn’t bonk or cramp once; the burger and the ice cream after that were heavenly; the massive respect for the people doing the 84 and the 168km versions; and the next two nights when I slept better than I ever do.

What could I do next time? Better physical and mental training. Shoes that don’t wreck the back of my ankle for days after. Try harder!

I love this race, and Northern Ireland is delightful. Recommended.