Not another 10k round Rother Valley?! I imagine that’s what lots of Striders thought when they saw this event advertised, and in fairness there have been a few races held there in the past which have sadly earned the reputation of being poorly organised, over-priced and the wrong length!

However, this one is a bit different. The Neurocare charity is linked with Sheffield Hospitals Charity, and raises money to support patients and staff at the Neurosciences and Neurology departments at the Royal Hallamshire Hospital, the Northern General Hospital and the Sheffield Institute for Translational Neuroscience (SITraN). They have raised significant funds to buy equipment and support research to save and improve the lives of patients with a range of debilitating or potentially fatal neurological conditions, and have been holding races annually (until Covid!) for years so they run a tight ship. The first time I took part in one was actually my first ever 10k race in 2015, and with my family have been supporting the event and the charity ever since. We were pretty excited to be back after the two-year hiatus due to the pandemic.

As you’d expect the main event is a variation on two laps of Rother Valley. The 10k started at 9:30am, with a 5k one lap Fun Run/ Walk due to start at 11:00am. We arrived and parked up close to a well organised event village with portaloos, refreshments, charity stall, St John Ambulance and number collection etc. We were quite surprised by the lack of Striders and runners generally, but it did fall on the same day as lots of other races including the Great Manchester Run (10k and Half Marathon), the Run for All Nottingham 10k plus more locally the Canal Canter 5 miler in Sheffield. After half-heartedly flailing my arms about a bit in an attempt to join in with the organised warm-up, I and the other Striders (all three of them!) shuffled over to the start along with about 100 other runners. 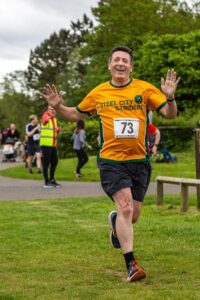 John finishing with a smile!

The route was familiar and well marshalled, with first aiders/ ambulances at regular intervals (including a bicycle medic) and when I finished I was pleased to see some friendly faces and receive my lovely wooden medal. However, my elation was marred and turned to shock when I saw a young man who had finished shortly before me being given chest compressions after collapsing at the end of his race. This is where I want to turn to focus on how well the event was organised: St John’s were with him straight away; very soon after an emergency ambulance car arrived, followed by police, more ambulances and finally the Air Ambulance which landed in the event village. The organisers responded perfectly, ensuring everyone was safe, and whilst the dignity of the gentleman taken ill was preserved they allowed everyone to finish. The great news is that it was reported the next day that the chap was in hospital but stable which was fabulous news and a credit to Neurocare and the organisers that they had taken safety so seriously. 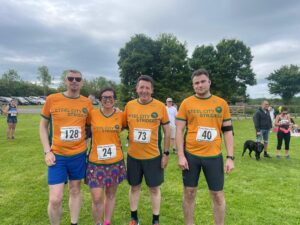 Striders in the 10k

Understandably, the 5k Fun Run was delayed but went ahead once the emergency services had left the scene, and a far bigger crowd of people than took part in the 10k set off for their one lap of the lakes. There were dogs of all shapes and sizes, people in fancy dress, walkers and runners (including the lovely Rosie Smith and her sons), and it was reported recently that over £14,000 has been raised for the charity so far.

Many thanks to everyone, especially lots of generous Striders, who sponsored us (well, mainly who sponsored my daughter Olivia, who has a neurological condition herself, who managed to walk the 5k using her crutches and leg braces in just under an hour and five minutes, which was a tremendous achievement for her). 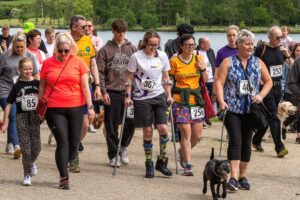 Olivia, Caroline and Peter in the 5K

4 Striders ran the 10k, which was won by Joe Sweetnam Powell of Sheffield Running Club in 35:25. First woman was Lucy Eddershaw (unaffiliated) in 47:27:

There were no results published for the 5k but at least 3 Striders took part!