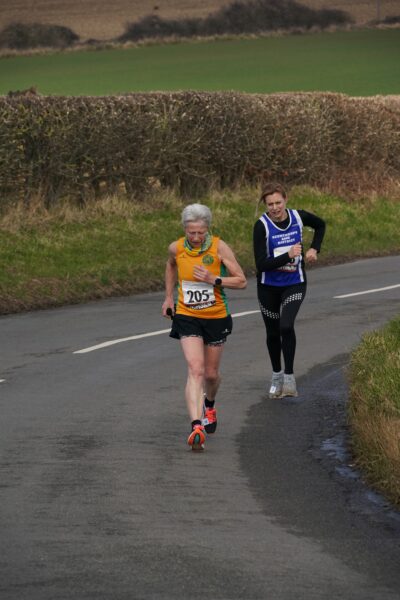 There’s footage from this race on YouTube. It’s the first time I’ve seen myself run. I don’t know whether to be ashamed of myself for being so ungainly, or proud that I ever get anywhere running like that.

Askern District RC’s races are a bit of a fixture for me, and this was my fourth go at the Norton 9. I think it might be the first time I’ve done it the morning after a beer festival though. It’s a big anticlockwise loop starting and finishing in the village of Norton, in that A1-M18-M62 triangle that counts as “somewhere north of Donny”. It has parking in a field, which can be fun in the wet, and usually it has toilets in a school. This year it had four portable bogs in the entrance to the field. And a looong queue. I stood in it for a bit, got told there were more bogs at the finish, found out there weren’t, then came back and stood in it again. As a result, I ran over the start line to the start, then immediately turned round and ran over it again because the race was beginning.

I’d actually been fairly sensible at the beer festival, so I was feeling ok with my freshly empty bladder and my bottle of Lucozade Sport. The first five miles are fairly gentle, out to Womersley and onto the road back. The roads are quiet and wide enough for cars to pass when they do turn up. It starts to get a bit bumpy in the last four miles, with two short sharp climbs, which can be a bit of a shock after five fast, flat miles. On the first of them I overtook a HRRC runner who seemed to be really struggling. I thought no more of him and carried on, trying to catch someone else, and piled up the last climb, ready for the downhill dash of the last mile back to the village. I was yards from the last left turn when HRRC came hurtling past me and up the hill to the finish. I couldn’t be disappointed, it was superb. I managed not to let anyone else past, and managed a sprint across the line, before collecting my t-shirt (advertising quality meat) and heading home, pleased I’d got out of bed.

130 Striders did this race in 2019, but only four turned out this year, which is a bit of a shame. The Askern races are great – well organised, friendly and fast – and I’d recommend them to anyone who likes sub-half road races.

The race was won by Jed Bartlett (Hallamshire Harriers) in 46:37, and Sarah Hunter of Ackworth Road Runners in 54:58. 395 runners finished.